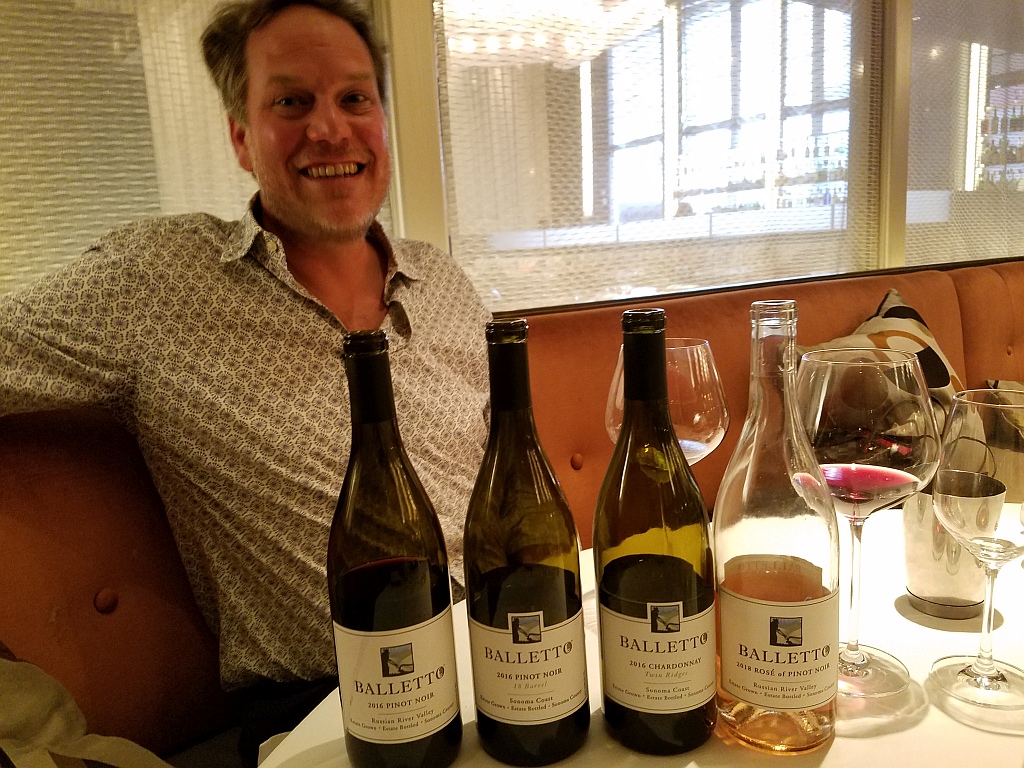 In 1977, the untimely death of 17-year-old John Balletto’s father confronted the teenager with an existential question. He answered it by remaining at home to assist his mother working the family’s five-acre vegetable farm in Sonoma County, instead of accepting one of several college athletic scholarship offers.

With each successful harvest, the mother and son purchased more agricultural land. By 1994, the family owned more than 700 acres, making it the largest farm in northern California. And along the way, Balletto courted and married Terri Cane in 1988 and raised two daughters, Caterina and Jacqueline, who work alongside their parents.

Encouraged by his neighbor Warren Dutton—owner of the famed Dutton Ranch chardonnay vineyard—Balletto planted his first vineyard in 1995 as a diversification strategy—in dought-stricken California, as vines require less water than other agricultural products. In 1998, Balletto’s entire agricultural holdings were wiped out by multiple El Nino storms. Despite the irony of losing their livelihood to too much water, the Ballettos knew California’s history of never having enough of it.

In 1999, the Ballettos began the arduous and expensive task of planting their entire farmlands with chardonnay, pinot noir and small amounts of pinot gris, zinfandel and syrah vines, completing the project in 2001. That year, they kept the best 10% of the harvested grapes, making their first Balletto Vineyards Russian River Valley chardonnay (391 cases) and pinot noir (689 cases), and selling the other 90% of the grapes to wineries.

I don’t recall when I first tasted a Balletto wine, but I remember the wine: Rosé of Pinot Noir. I recall its freshness, the combination of fruit flavor and crisp acidity. It was a striking contrast to many California (and French) sugary rosés stacked in retail stores.

So, when I met Balletto’s winemaker Anthony Beckman at Manhattan’s Aureole restaurant, my first question was, “how do you make such a good rosé?”

He said when he arrived at Balletto in 2007 the rosé was made by the saignee method, which means “bleeding” in French. The process creates rosé as a by-product of making red wine: a portion of the pink juice is “bled” from the red grape must after a few hours of masceration, then fermented separately to produce rosé. Beckman said that in 2007 Balletto’s rosé had five grams of sugar in it.

In 2009, Beckman ceased using the saignee method by dedicating 10 acres of pinot noir in the Guernevill Road vineyard for rosé only. Then, he began reducing the grape’s brix (a measurement of sugar in the grapes) from a level of 23. Each successive year, he harvested the pinot noir at a half point lower until he got to 21 brix. This lowered the alcohol level from 13.6% to just over 12% and he fermented the rosé completely dry.

Beckman’s newest vintage is the slightly orange-tinted and scented 2018 Balletto Rosé of Pinot Noir Russian River Valley. It has a gravelly backbone behind the refreshing watermelon, cranberry and red-fruit flavors. It’s fresh and dry, not cloying…with pleasant fruit flavors, but not fruity. I noted “this is not a frivolous wine.” 92 points. Just released to the market, expect to pay $16 to $20.

The 2016 Balletto Pinot Noir Russian River Valley is a composite of grapes from six single-vineyards in three appellations. Its black-cherry color and aroma is accented with black-pepper and paprika scents. The medium body carries ripe black-cherry, vanilla and raisin-y flavors; its forwardness is typical of many California pinot noirs and eminently drinkable. 88 points. Retail pricing has a wide range from $20 to $34.

With 16 vineyards in the southeastern section of the Russian River Valley, it comes as no surprise that Balletto blends grapes from some of them as it did for the 2016 Balletto 18 Barrel Pinot Noir Sonoma Coast. Beckman selected grapes from the estate’s three top vineyards in the cool and steep Sebastopol Hills: Sexton Hill, Cider Ridge and Burnside Road (the family’s first vineyard planted in 1995).

Beckman made the first 18 Barrel bottling in 2013 and continued it with every vintage except 2015, which yielded only 11 barrels. The 2016’s appealing blackcherry, cola and pepper-y aroma heralds the tasty fruit to come with a spiciness that triggers memories of Chambolle-Musigny and Morey-Saint-Denis. 90 points. Limited distribution; sold at the winery for $46.

Generously textured with creamy pear and vanilla aromas and flavors and balanced by a mild acidity and minerality, the 2016 Twin Ridges chardonnay was delightful with Aureole’s spaghetti carbonara. 88 points. This first vintage is sold only through Balletto’s wine club for $42.

If pinot gris is thought about at all, it is usually associated with Alsace and northern Italy, but the 2018 Balletto Pinot Gris Russian River Valley will turn your attention to Balletto’s Sebastopol Hills vineyard.

Pinot gris is a mutation of pinot noir. So, Balletto understood the value of planting its pinot gris vineyard in Sebastopol Hills’ prime pinot noir territory on south-facing slopes. In 2018, that decision delivered a pinot gris with pronounced floral and cilantro-like aromas, and mouth-filling lime and white-peach flavors, making most Italian pinot grigos seem anemic. It was ideal with my home-cooked chicken fricassee and couscous. 90 points. Just released to the market, retail prices range from $17 to $20.

Balletto continues the policy of retaining the best 10% of the harvested grapes, and selling the other 90% to 25 wineries. Its share yields 20,000 to 25,000 cases annually. While distribution is limited, the wines are worth the search.

previousA bouquet of roses and rose for mother

nextSummer wines: from the serious to the playful