Home→Australia→Toast end of summer with Aussie stunner
Previous Next

Wine consumers rarely focus on Australian sparkling wines, but one you should try is Taltarni Brut Tache non-vintage.

In the early 1970s, John Goelet, American businessman and descendent of the Bordeaux Guestier wine merchant family, hired Bernard Portet to search for suitable vineyard sites in the New World. Portet, whose father was the technical director at Chateau Lafite-Rothschild, returned to Goelet with recommendations to purchase land in Australia and Napa Valley. The latter location became Clos du Val winery, and Australia gained Taltarni Vineyards.

Because both men have Bordeaux backgrounds, it was only natural that Taltarni would make wines based on cabernet sauvignon, cabernet franc, and merlot. But surprisingly, Taltarni produces a first-rate sparkling wine, too.

In 1986, Goelet purchased an old dairy farm in Tasmania and developed a winery dedicated to making sparkling wines in the champagne method. Like the Champagne region, Tasmania has a cool climate conducive for growing chardonnay, pinot noir and pinot meunier, the three grapes used for champagne.

Winemaker Loic Le Calvez was educated at the University of Bordeaux and worked in that region as well as in Sonoma County, California. His first harvest at Taltarni was in 2001, and by 2007 he was Taltarni’s chief winemaker. He makes the Taltarni Brut Tache non-vintage from a blend of 60 percent chardonnay and 40 percent pinot noir. The first fermentation, which changes the grape juice to wine, is done at Taltarni’s Tasmanian winery. After three months of aging, the still wine is transported to Taltarni’s Victoria winery, where it is blended and undergoes the second fermentation in the bottle, which is the Champagne method for creating the bubbles.

Le Clavez’s efforts produce a sparkling wine with a poached salmon color. The refined bubbles release a gentle rose and cherry scent, and the liquid imparts delicate almond and white fruit flavors. Consumers who find champagne too tart will appreciate the 13 grams of sugar, putting the Taltarni Brut Tache sparkling wine at the upper range of Champagne’s Brut category limit of 15 grams per liter. This bottle of Taltarni Brut Tache non-vintage recalled others that were equally enjoyable and elegant.

Taltarni is in Australia, but its style reflects its French and Bordeaux ancestry.

The Taltarni Brut Tache non-vintage sparkling wine is an ideal aperitif; it is a tasty match for shellfish, crudites, and roasted chicken with a cauliflower mousse or puree. 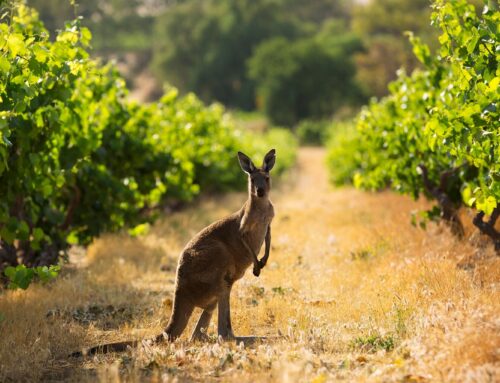