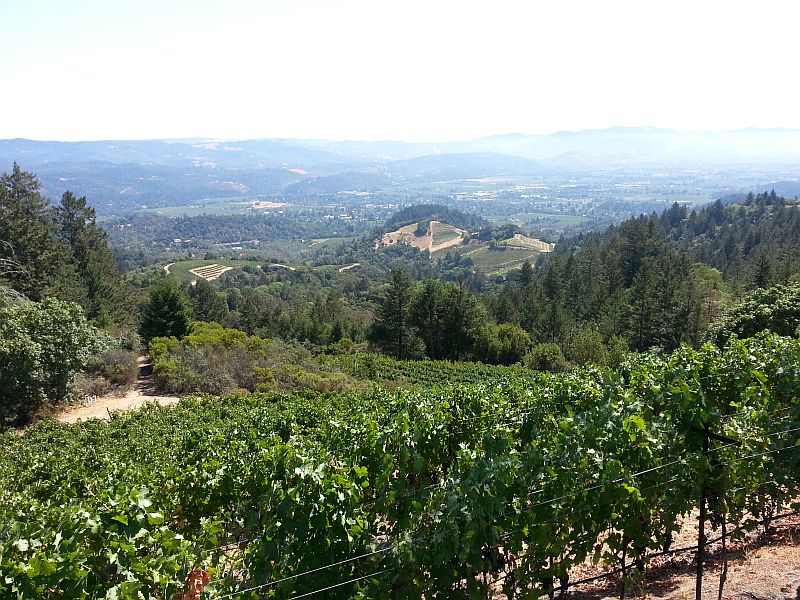 In 2014, I drove up Napa Valley’s Spring Mountain for my appointment at Newton Vineyards with Rob Mann, its newest winemaker. I twisted and turned my way up the mountain, arriving at an unexpected Asian-influenced designed winery with a fire-engine-red British phone booth by the entrance. I discovered the architectural touches honored the heritage of Su Hua, the wife of Peter Newton, an Englishman who added the whimsical phone booth when the couple founded Newton Vineyards in 1977.

Both a lawyer and journalist, Newton made his fortune in the paper manufacturing business in the 1950s and 1960s, allowing him to start Sterling Vineyards in 1964 as part of the first wave of professionals who built wineries in Napa Valley in the ensuing decades.

Newton’s wines were highly anticipated and praised with the first release in 1979. As the decades marched on, however, I found the chardonnay and cabernet sauvignon followed the trend of oak-scented- and flavored wine, losing their identity in an ever-growing field of new Napa wineries along with a flood of winemakers and consultants coming and going with their own ideas.

In 2001, the Newtons sold the winery to the luxury goods company LVMH, who owns 75 brands from Dom Perignon and Chateau d’ Yquem to Louis Vuitton, Givenchy, Bulgari, Sephora and a chorus of other great names.

Three months ago, Newton celebrated its 40th Anniversary at Per Se restaurant in Manhattan, and introduced its newest winemaker, Milan-born Alberto Bianchi, and its wine consultant, Bordeaux-born Philippe Melka.

At the reception, the 2017 Newton Vineyard Chardonnay Beckstoffer Carneros Lake Vineyard offered delicious apple, pear and passion fruit flavors with a mineral backbone and a long, balanced finish. 92 points; will be available in March, expect to pay $120.

Per Se paired an herb-roasted monkfish with the 1999 Newton Vineyard Cabernet Sauvignon Unfiltered Napa Valley. The wine’s sage, oregano, black tea and toasted oak aromas were mellowed with time, and the soft-textured black-fruit flavors flowed on graceful tannins. The chef’s beurre rouge sauce linked the wine and fish, and the monkfish’s richness responded to the mature wine. It was a successful and gutsy culinary presentation. The wine is not commercially available.

Rob Mann, who, at the time, was the winemaker at Australia’s Cape Mentelle, another LVMH property, made the wine. It is not commercially available.

The biggest surprise of the dinner was the 1979 Newton Vineyard Cabernet Sauvignon Unfiltered Napa Valley. The vintage was filled with average wines—many offered pleasant drinking through the 1980s and 1990s—but by the new millennium, most were tired and some had quietly passed away. So, when vibrant aromas of black-pepper, cedar, black-fruit and tea rose from my glass, and ripe black-cherry flavor with soft, but noticeable tannins crossed my palate I thought my server poured the wrong wine into my glass. My requested second glass was brought along with a new bottle of the 1979. From this pour, rose lively fruit and herbal aromas and rich, black-cherry flavor with a stony backbone. It was remarkable and a testament to Newton’s winemaking and the subterranean cellars in which it stores its library. The 1979 is not commercially available.

Our final wine, 2016 Newton Vineyard Cabernet Sauvignon Spring Mountain District Napa Valley is pungent with blackberry, black cherry, and herbal scents and flavors. Under the plush texture are firm tannins that need five years to release their grip. This wine is from a great vintage. Newton has produced wines with 20 and 40 years of life from lesser vintages like 1979 and 1999 respectively. The 2016 Newton Cabernet Sauvignon is destined to reign from the mountain top. 94 points; will be available in March, expect to pay about $210.