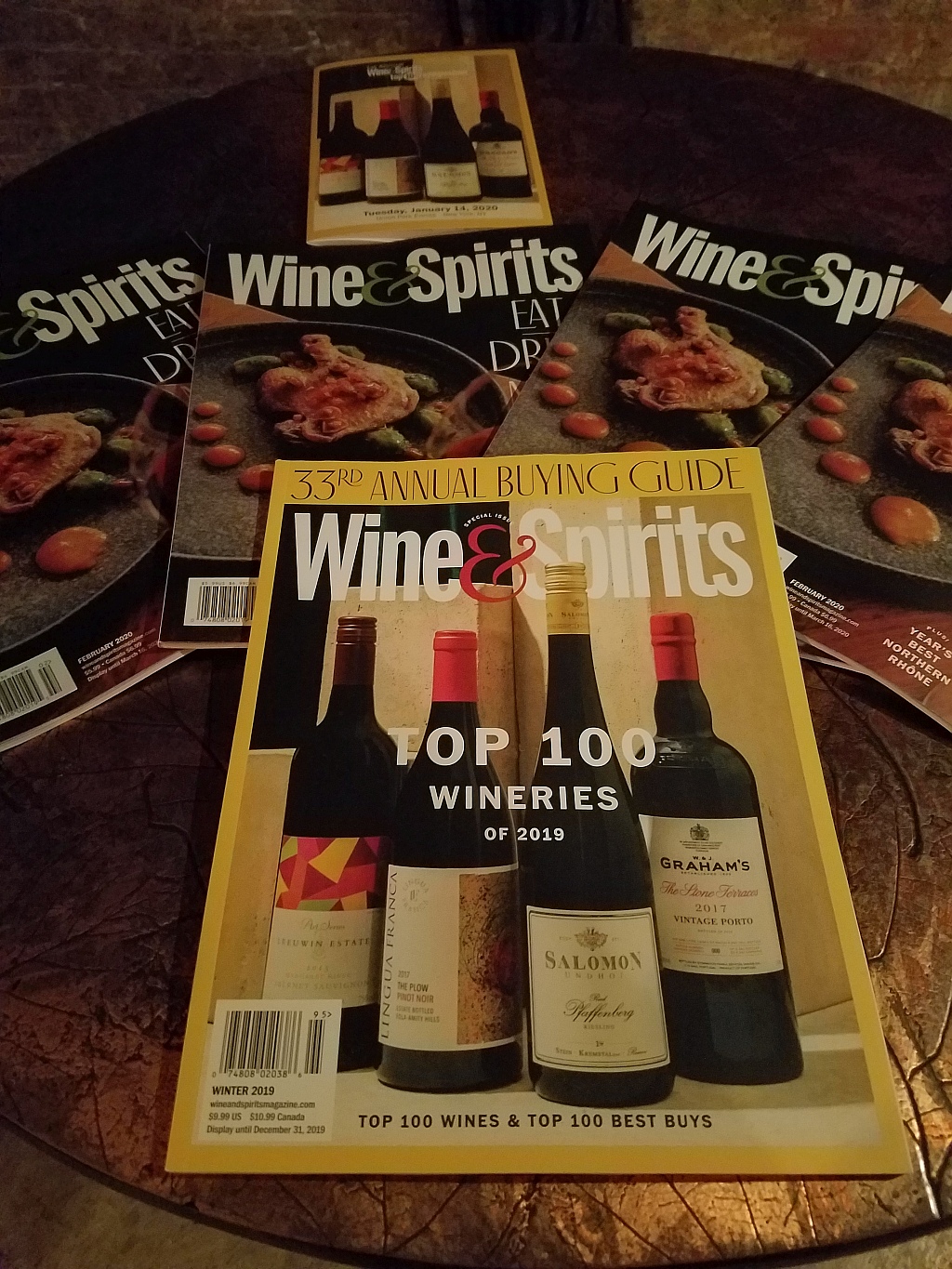 For the inaugural event, publisher and editor Joshua Greene and his staff combined their selections of the Top 100 wines from the 11,500 bottles they tasted in 2019 with food from some of New York City’s iconic and cutting-edge restaurants. With the 100 award-winning wines available for tasting, along with added prized bottles from each winery, I had to be selective.

I was taken by the Pere Ventura Rose, made from organically farmed 20-year-old pinot noir vines. It’s produced by fermenting one batch of grapes as a rose, and the other as a blanc de noir. The two wines are blended and fermented a second time in bottle and aged for 40 months, creating a bright pink sparkler with raspberry and cherry aromas, refined bubbles and a nutty, red-fruit flavor. Pere Ventura also offered a 2012 Cava Grand Reserva Brut made from xarello and chardonnay and aged 45 months. It was perfect with the Blue Point oysters only a step away at the strategically placed Grand Central Station Oyster Bar stand.

Amongst many wines in the middle of the room, were two of my favorite Burgundy producers: Domaine Vincent Girardin, and Thierry and Pascale Matrot.

In the 1990s and early 2000s, I witnessed Girardin move from aggressively oak-aged wines to organic farming and well-balanced bottlings. In 2012, Girardin sold his business after a career that started in 1980 when he was 19 years old. Now, winemaker Eric Germain produced the 2016 Domaine Vincent Girardin Puligny-Montrachet Premier Cru Les Folatieres. He captured the richness of the vintage and shaped it with an elegant texture.

I was introduced to Matrot, a Meursault family winery, in the 1980s when it was known as Domaine Pierre Matrot. Today, it is run by Pierre’s granddaughters Adele and Elsa Matrot. Taking over from their parents—Thierry and Pascale—in 2016, the sisters produced a bouquet of fruit and herbal aromas and flavors in their award-winning 2016 Blagny 1er Cru La Piece Les Sous le Bois Rouge.

I enjoyed both wines with pork belly with ssamjang aioli from Jungsik, a two-star Michelin restaurant in Tribeca specializing in Korean fare.

A pleasant surprise was seeing Ross Cobb at the adjoining table. Ross’s father, David, a biologist and marine ecologist, spent years studying the soil and climate of the Sonoma Coast before planting his first vineyard in 1989, and can rightly claim to be one of the founders of Sonoma Coast viticulture.

As the second-generation owner and winemaker, Ross creates pinot noir and chardonnay wines in minuscule quantities that are as exquisite as a perfectly cut diamond. The 2016 Sonoma Coast Diane Cobb Coastlands Vineyard Pinot Noir was featured at the tasting. The wine is made from grapes grown in an acre and a half parcel that Diane Cobb, Ross’s mother, hand cultivated from the vineyard’s inception in 1989. The cold climate gives the delicious red-fruit flavor a streak of acidity and the soil renders a stony backbone. And much to my delight, there was not a trace of alcohol in the taste. The Diane Cobb pinot noir has more body than most burgundies, and with its grand cru structure and length it’s a soul mate to Burgundy’s Cote de Nuits wines. Only 2,100 bottles were produced.

Entering the Italian wine section, I stopped at Elvio Cogno winery, owned by the enthusiastic couple Vaulter Fisson and Nadia Cogno, daughter of Elvio. The 2013 Barolo Ravera Bricco Pernice is made from the winery’s oldest vineyard, a five-acre hilltop parcel (bricco in Piedmontese dialect) containing a significant number of vines more than a half century old. The ruby-colored wine is enticingly perfumed and flavored with refined tannins and has the capacity to be superb for decades.

On the other side of the room was Marchese Piero Antinori’s 2015 Solaia. Cashmere came to mind as I rolled the luxuriously textured cabernet sauvignon-based wine around in my mouth. Aromas and flavors of blackberry, clove and blackcherry added an element of immediate irresistibility, but patience will be rewarded for those who cellar this elegant wine.

If you ever questioned the monetary value (ticket price is in the three digits) of attending an event like the Wine & Spirits Top 100 wines, it was answered in the positive after you took four steps from the Solaia table, arriving at the other great Tuscan cabernet-based wine: Sassicaia.

The 2015 Sassicaia is very Bordeaux-like with its red-fruit aroma and flavor flowing through the stream of blackberry character that’s carried on a gravelly undernote.

Tasting these two great wines back-to-back showed Solaia’s modern, plush New World-style texture to Sassicia’s classic Bordeaux identity. It was a moment when pleasure and reflection give insight, and you understand why comparative tastings are the key to learning.

I was a bit confused to find Stags’ Leap Winery placed between the Italian and South American wines, but not surprised to see its 2015 Stags’ Leap District Ne Cede Malis Petite Sirah awarded a Top 100 position.

Its fathoms-deep blackberry and plum flavors and velvet texture are the essence of Napa Valley wine, and the dark chocolate aftertaste is not something you want to give up. That’s apropos to the name, as the Latin ne cede malis means “never give up” or “don’t yield to misfortune.”

It came as no surprise to find the great Rhone winery Guigal a Top 100 winner. The 2015 Guigal Croze-Hermitage rouge was wisely decanted, allowing the hillside vineyard syrah to release its delicious spicy red-berry flavors with a stony backbone and integrated tannins. Fortuitously, only inches away, The Dutch restaurant offered its lip-smacking lamb chop yaki. If truth be told, I had to have seconds of both.

Until this event, I associated Washington State’s L’Ecole No 41 with quality white wines. After tasting the award-winning 2016 L’Ecole No 41 Walla Walla Valley Ferguson Vineyard, I now see red.

This Bordeaux varietal blend of cabernet sauvignon (62%), merlot (26%) and cabernet franc and malbec (6% each) is austere. Grown in a 30-acre vineyard of volcanic rock, the black-fruit aromas and flavors are packed with minerality and notable tannins. Decanting this wine is a must. Cellaring it is not an issue; living long enough to enjoy its full development is. (And placing the wine within reach of the River Café’s Barolo Raised Oxtail and Ricotta Gnudi was an act of organizational genius.)

At this point, my palate was satiated, but as I walked towards the door, I noticed the salted caramel chocolate mousse cake with an orange-oat sablee made by New York’s International Culinary Center. I heard it calling me. I answered. It was marvelous.

So, I ventured back to the first table where a generous taste of my favorite American sparkling wine awaited, 2011 Roederer Estate L’ Ermitage Anderson Valley Brut. My palate cleansed, I departed pleased at the high level of the initial Wine & Spirits Top 100 Symposium.

All proceeds from the event were donated to NY/NJ Baykeeper, an organization that monitors the waters of the NY/NJ harbor estuary where the Hudson, Hackensack, Passaic and Raritan rivers meet the ocean.

The NY/NJ Baykeeper helps to protect water resources in the most densely populated region of the US, supporting initiatives to fight water pollution. Visit https://www.nynjbaykeeper.org for more information.

previousDining in Italy: from Venice to Rome, Part One: Take Five in Venice

nextNewton Vineyards is king of the mountain