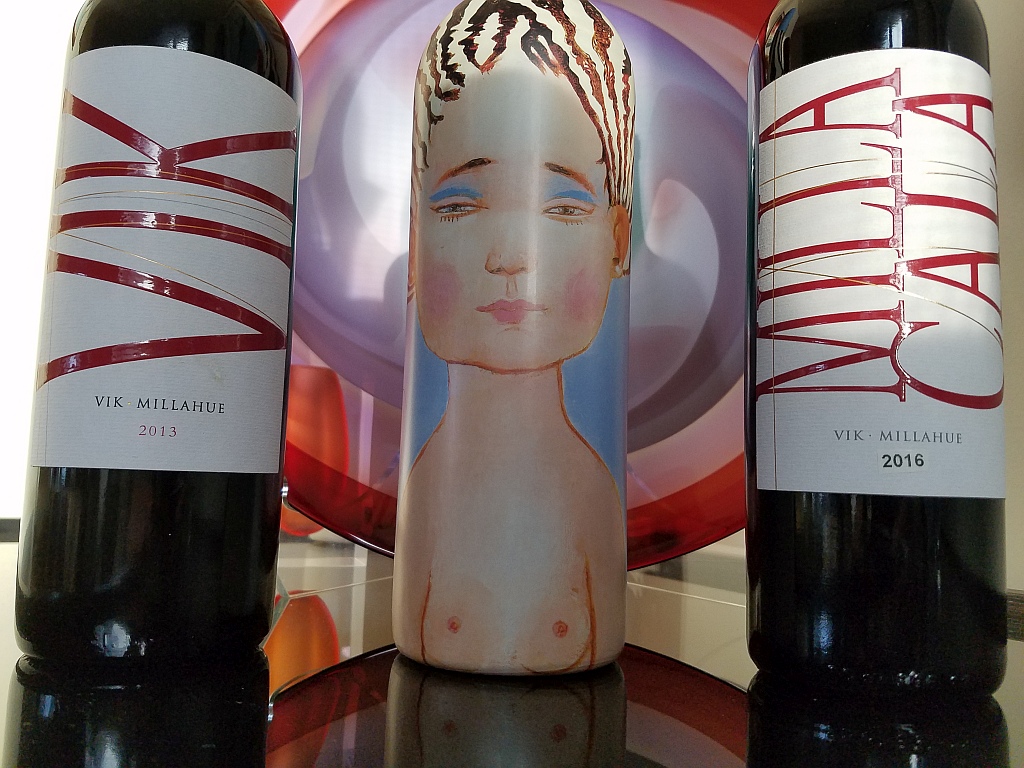 Entrepreneur Alexander Vik chose Chile’s Millahue Valley, whose name in the indigenous Mapuche’s language means “place of gold,” to make his billionaire-style investment in Vina Vik. Deep pockets equipped him to do so: Born into a family of fur merchants, he chalked up a stream of successes in the financial markets, real estate, insurance and dot-com startups.

In 2004, the then-50-year-old Norwegian born, Harvard-educated businessman hired French wine consultant Patrick Valette to search South America for a location that would produce the best wines in that hemisphere.

Valette, who grew up at Saint-Emilion’s renowned Chateau Pavie—and whose father Jean-Paul Valette hosted me on my Pavie visits in the 1980s and early 1990s—advised Vik to invest in the undeveloped Millahue Valley within Chile’s larger Cachapoal Valley. In 2006, Vik followed that advice, purchasing 11,000 acres of woodlands, valleys and a lake.

With the same break-neck speed and risk taking that is his calling card, Vik assembled a team that planted 1,000 acres of vineyards across 12 valleys with Bordeaux varieties of cabernet sauvignon, cabernet franc, carmenere and merlot, alongside syrah (which, although not of Bordeaux, was, for centuries, blended in Bordeaux when poor vintages required a boost from the Rhone Valley grape). A 10,000-acre forest with wild animals and a lake surround the vineyards, creating an ecosystem within an ecosystem. A state-of-the-art winery features numerous artistic touches as well as environmental considerations.

In 2006, Valette hired winemaker Cristian Vallejo who produces three wines from the five red grapes. Vineyards are planted with the intention that the grapes will be used exclusively for one of the three wines, but, in practice, some wine gets reclassified. The wines differ in the blend and the aging time in French oak barrels. Recently, I tasted the newest vintages.

The 2013 Vik Millahue Valley, the estate’s equivalent of a chateau wine, is packaged in the New World’s broad-shouldered, heavy glass bottle. Its blend of 67% cabernet sauvignon, 17% cabernet franc, 14% carmenere and 2% merlot is aged 23 months in new oak barrels, and registers 14% alcohol.

Pronounced mocha, blackberry and black-tea aromas rise from the glass, and extravagant black-fruit flavors are carried on a full body with plush tannins, giving the wine a luxurious texture. The 2013 Vik weaves Bordeaux’s elegance with the New World’s fullness. This is a wine that needs to be aerated in a decanter—which I did. I started drinking it after 30 minutes. 94 points. Expect to pay about $140 to $160.

La piu belle is Italian for “the most beautiful.” The eye-catching baby-blue-colored 2013 La Piu Belle Cachapola Valley bottle features a topless woman, which will test the regulators at Bureau of Alcohol, Firearms, Tobacco and Explosives who give label approval (they were roundly mocked for rescinding their approval of the 1993 Chateau Mouton-Rothschild label after a single ad hoc group objected to the nude female on the label created by the artist Balthus).

The concept behind La Piu Belle’s creation in 2011 is similar to that of a Bordeaux chateau’s second-label: wines not at the level of the Vik premium estate wine are blended with wine from the designated vineyards for La Piu Belle. In 2013, the blend was 54% carmenere, 32% cabernet sauvignon and 14% syrah. It was aged 25 months in new French oak barrels, and has a moderate 13.8% alcohol.

Its glistening black-cherry hue mirrors the Vik estate bottling, but the herbal, black-fruit and vanilla aromas are significantly different from the flagship wine. Its full body carries a rich black-fruit flavor wrapped in a velvety texture from the extended new-oak aging regime. Like the Vik, it arrives in the broad-shouldered, heavy glass bottle, but at a second label’s lighter price. 92 points. Expect to pay about $88 to $100.

The Milla Cala is the third wine in Vina Vik’s trilogy. It follows the Bordeaux format of blending barrels of wines that did not reach the level required for the primary or second labels with wine from designated vineyards. It is bottled in a standard Bordeaux bottle.

The 2016 Milla Cala Cachapoal Valley is 67% cabernet sauvignon with carmenere and merlot contributing 17% and 11% each, and cabernet franc and syrah limited to 4% and 1%, respectively. The wine is aged for 20 months in a mix of oak barrels—15% new and 85% used—and has a moderate 13.8% alcohol.

Black-fruit and herbal aromas introduce the elegant texture of the black-plum and blackberry fruit flavors that glide on soft tannins across your palate. Immediately pleasing to the senses, and instantly likeable at the checkout counter, as the 2016 Milla Cala follows the Bordeaux pricing format of being about 70% less than the winery’s first label and half as much of the second label. 91 points. Expect to pay about $40 to $45.

With their initial success at the winery, Vik and his wife Carrie invested in the creation of the 23-room hotel Vik Chile on the estate. Now they plowed more money into opening Puro Vik, 22 glass houses perched on the Millahue Valley hillside with views of the Andes Mountains, giving a new meaning to the Mapuche’s place of gold.

Chile’s long, slender shape defines South America’s western edge and is front facing to the Pacific Ocean. The capital, Santiago, lies in the middle with the Andes Mountains as a backdrop, and nearby, are the country’s most historic wine regions. My first trip there was in the early 1990s w...

If you’re wondering what to give this holiday season, recall what Ernest Hemingway famously said, “Wine is the most civilized thing in the world.” For wine collectors, receiving a special bottle is cherished for years, and possibly decades. Chateau Montelena is renowned for its Judgment of...

It was the beginning of 2005 when I last saw Aurelio Montes. He was standing in front of his new winery in Apalta, Chile, smiling and waving goodbye to me. I was sitting in a cart attached to a tractor pulling me up Vina Montes’ steep hillside syrah vineyard. As I looked over the tractor’s hoo...

Starting the new year with a delicious red wine at a bargain price is easy when you pour a glass of 2007 Casa Lapostolle, Merlot, Rapel Valley. Casa Lapostolle was founded in 1994 by a partnership of the Chilean Rabat family and Alexandra Marnier Lapostolle — the great-granddaughter of Alexan...

Wine buying for Labor Day weekend parties is made easy with the Miguel Torres Las Mulas 2009 Sauvignon Blanc and 2008 Cabernet Sauvignon wines. The Torres family has been making wines in Spain for 140-years. In 1979, they became the first foreign wine company in Chile when they purchased a small wi...

A delicious good-value red wine is awaiting you in the 2009 Vina Calina Carmenere Reserva. Vina Calina is a Chilean winery located in the Maule Valley. In 1999, Jess Jackson purchased the El Maiten estate, replanted the vineyards and built a modern winery. Jackson, a California lawyer who gave up t...

You get a Rothschild’s commitment to excellence at a commoner’s price with the 2010 Los Vascos Sauvignon Blanc and Chardonnay wines. Most wine consumers think Chile is new to the wine world, but its wine history dates to the 16th-century. Los Vascos’ history can be traced to the Echenique fam...

Budgeting for holiday parties is made easy with good- value wines from these highly-regarded family-owned companies. Pouring a Spanish Cava like the nonvintage Anna de Codorniu rose’ sparkling wine is an ideal start to the party. Named for the 17th-century matriarch of Codorniu, it’s a ...