“What could these wines possibly taste like,” I pondered, holding the two bottles from the Czech Republic.

The Czech Republic is the most recent territorial creation of an area that, for nearly 1,400 years, has experienced a kaleidoscope of changes — beginning in the ninth century under the Great Moravian Empire, followed by inclusion into the Holy Roman Empire, then rule by the Habsburg monarchy in the 15th century, the Austrian Empire in the 18th century and the Communist Party of Czechoslovakia after World War II. Following the 1989 Velvet Revolution, the former Communist state was divided into the historical territories of Bohemia and Moravia, creating the Czech Republic and the Slovak Republic. Yet through it all, wine was constant.

Czech wine traces its roots to vineyards planted in the third century, when Roman Emperor Marcus Aurelius Probus encouraged such planting in the northern Roman colonies. Its vineyards made a quantum leap in the 13th century, when monks planted French and German grape varieties and applied vineyard management techniques from those countries. In 2004, the Czech Republic joined the European Union and adopted its wine regulations.

As I pulled the cork on the 2011 Vino z Czech Michlovsky Sauvignon Blanc, I wonder where it will be on the sauvignon blanc style chart: New Zealand stands at one end with its aggressive citrus character; Bordeaux holds the middle with its softer fruit from restrained oak aging or semillon blend; and California’s fatter texture and riper fruit flavors tuck in the other side.

I was pleasantly surprised with the 2011 Vino z Czech Michlovsky Sauvignon Blanc undulating green apple, floral and honey aromas. Its mild apricot and apple flavors were harmonious with the acidity, and the texture was full without being heavy. Its palate weight made me think of Bordeaux; its fruit flavors had a toe or two in California. The 2011 Vino z Czech Michlovsky Sauvignon Blanc was delightful.

The nonvintage Vino z Czech Ludwig Cabernet Moravia was an unknown star in my wine constellation. In the late 1970s, Lubomir Glas crossed cabernet franc with zweigelt- itself a variety made in the 1920s from two Austrian grapes- creating cabernet moravia.

Moravia’s warmer climate and soli composition makes it the source for nearly all the wine from the Czech Republic (Bohemia produces most of the beer). The Ludwig winery owns 15 acres of vineyards in Moravia.

I was captivated by the red fruit aroma and cinnamon-like scent of the nonvintage Vino z Czech Ludwig Cabernet Moravia. It made me recall certain pinot noirs from the Rheingau. Then the tasty raspberry, cranberry-like flavors came prancing across my palate, with lively tannins and tingling acidity. Its texture and weight made me think of Cote de Beaune pinot noirs. The finish was flavorful and balanced.

These are two wines you want to try. They won’t be easy to find as wine merchants have thousands of wines to choose from that are known brands from familiar lands. But if you are passionate about wine, or like the adventure of learning, have your retailer make the effort to get a few bottles for you.

Vino z Czech is the Connecticut importing company founded by Noah and Cheryl Ullman. The contact number is (860)469-0649.

The 2011 Michlovsky Sauvignon Blanc retails for approximately $16; the nonvintage Ludwig Cabernet Moravia is about $18. 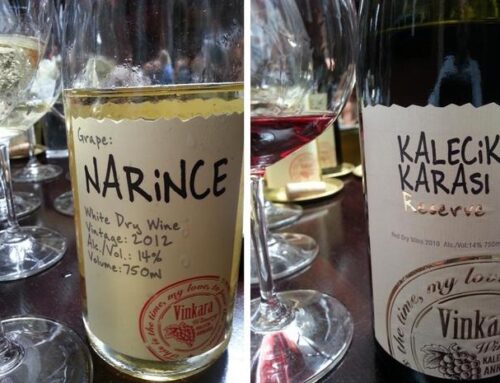