Food and wine pairings are the endless sport of gourmands and winos, and an ongoing challenge for home entertainers. Today’s article is the first of an occasional series that will deconstruct food and wine matchmaking through the lens of a professional chef (who happens to know his wine).

For 23 years as a chef/owner of three restaurants, food and wine pairings were a daily “task” I never tired of. With award-winning and highly acclaimed wine lists, I found it mentally stimulating and exhilarating to the senses to match ingredients and wines, then execute the dishes that made them shine. It’s a passion that still burns brightly.

So, when I received an invitation to a pairing of Fontanafredda Barolo Riserva wines from 2010 to 1996 with dishes from the kitchen of Eataly in the Flatiron district of Manhattan, it immediately triggered a Pavlovian response.

Fontanafredda was born out of love. In 1858, Vittorio Emanuele II, the first king of Italy, purchased the Fontanafredda hunting estate in Langhe in the Piedmont region, for the home of his mistress (and later wife), Rosa Vercellana. They produced a son, Count Emanuele Alberto di Mirafiori, who created the winery at Fontanafredda and made its first Barolo in 1878.

In 1932, economic and political turmoil in Italy caused the ownership of the estate to be transferred to the Monte dei Paschi di Siena bank (which has the distinction of being the oldest operating bank in the world, and the most financially troubled bank in Italy). It retained the winery until 2008, when entrepreneur Oscar Farinetti became the principal partner of Fontanafredda. (Farinetti founded the Eataly food and wine emporium in Turin, and is now a partner at Manhattan’s two Eataly venues with celebrity chefs Mario Batali and Lydia Bastianich (she of television and Felida restaurant fame) and her son, Joe Bastianich.) 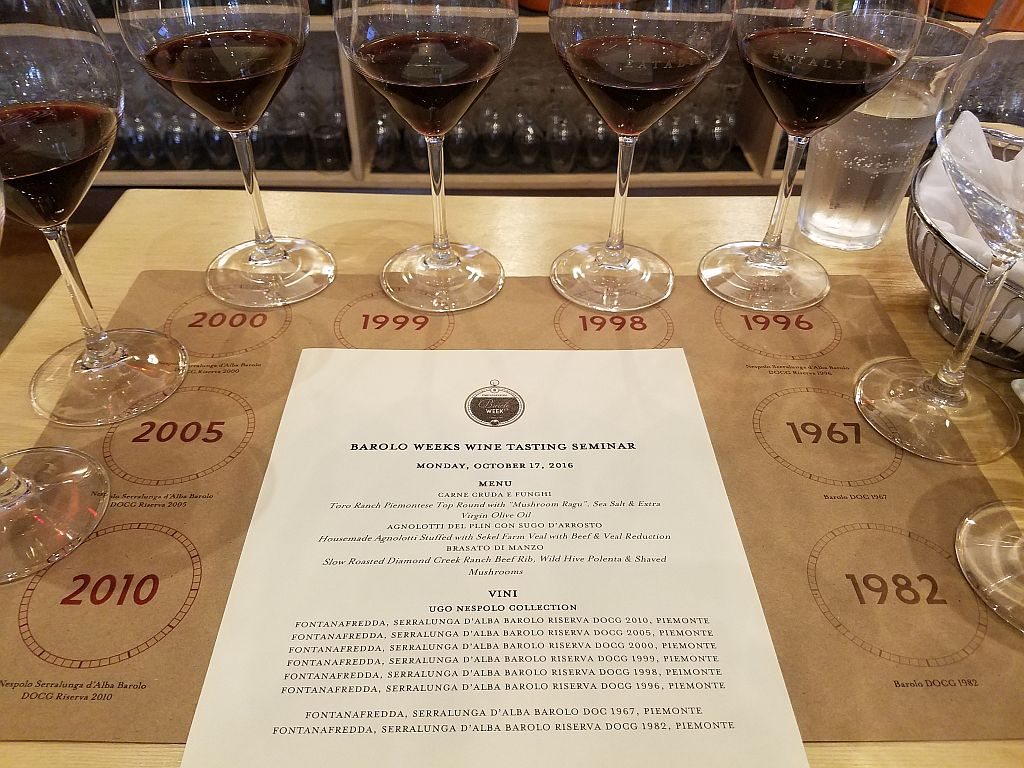 The first step in the decision of which wine(s) pair best with the dish is to rid your mind of all prior judgments about any of the wines or vintages. Just because a wine is from a great or indifferent vintage does not mean it will be great or indifferent with a particular dish. Nor is every wine reflective of the quality, or lack of it, in a specific year. And even if the wine does reflect the vintage’s standard, it may be too young or old for the food presentation.

However, the two oldest vintages found their stride in Eataly’s second course, Agnolotti stuffed with veal, and sauced with a beef and veal reduction that had the richness of a great French demi-glaze bound with a substantial amount of butter. Luxurious and decadent it was.

To this sinful sauce, the 1996 and 1998 Barolo Riservas released a stream of acidity that cut the unctuousness, opening a path on my palate to the tender pasta encasing the elegant veal. But the black-fruit character of the 1999 Barolo Riserva that endeared itself to the top round, overwhelmed the Agnolotti. The slightly less pronounced fruit of the 2000 Barolo Riserva allowed its acidity and tannins to fend off the buttery sauce, while not blocking the veal stuffing from getting its palate recognition. Meanwhile, the 2005 Barolo Riserva was too boisterous, keeping the food disconnected from the pairing. Repeating its performance with the top round, the youthfulness of the 2010 Barolo Riserva made it stand alone from the Agnolotti, although its lively acidity and vibrancy tamed the extravagant presentation.

On its face, the third course of slow-roasted beef short ribs with polenta and shaved mushrooms would seem the ideal dish for any Barolo. And, while that turned out not to be case for all the wines, it was for the 2010 Barolo Riserva. The combination of the juicy roasted meat was matched to the wine’s pungent black-cherry fruit flavor and lively acidity and tannins. It was a very pleasing yin and yang dance on the palate. This dish also gave the 2005 Barolo Riserva the opportunity to show its food compatibility—not only with the short ribs—but with the polenta and shaved mushrooms. The 2000 Barolo Riserva was a good friend to the short ribs. Its black fruit and tannin structure matched the meaty beef with its caramelized top and forkful of polenta flavored with the braised beef jus. And while the 1999 Barolo Riserva was good—and, if not part of a comparative tasting, would be a praised choice with the dish—I preferred the three younger vintages over it. But I was most surprised to find how the lighter 1998 Barolo Riserva was harmonious with a forkful of the meat-sauced polenta, mushroom and short ribs. It let each ingredient come forward, then coalesced around the wine’s black-cherry and tobacco flavors—and the wine’s acidity carried a pleasing aftertaste and cleansed the palate for the next bite. However, the 1996 Barolo Riserva repeated its problem with beef. It lacked the fruit flavor of the younger wines and the understatement of the 1998.

After the food and wine comparison, the 1982 Fontanafredda Barolo Riserva and 1967 Fontanafredda Barolo were presented. As I had some of the beef short rib remaining on my palate, I tasted both wines with the food. Each was dominated by the dish. But on their own, they were enchanting.

It might seem odd to be sipping Barolo, but the nebbiolo grape becomes gentle and charming with age. Sometimes the wines become the equivalent of a watercolor painting with their translucent hues and delicate aromas, flavors and textures.

The 1967 Fontanafredda Barolo had the brownish-orange hue of weather-exposed red brick. Its aromas traveled from leather to tobacco to Mandarin orange and fall’s forest floor. The macerated cherry and strawberry flavors were carried on integrated tannins, giving the wine a long graceful finish.

The 1982 Barolo Riserva’s fading red-leaf color of late autumn, and strawberry-cherry flavors with soft tannins delivered a softness and elegance that was contemplative. I wondered why Eataly choose to serve such a rich, unctuous French-cuisine sauce with the pasta. What would be the likelihood of such a presentation being on an Italian restaurant menu or prepared at home and served with a Barolo Riserva?

I thought it would have been a better real-world test for the Fontanafredda Barolo Riservas if they had served the pasta with a crumbled pork sausage sauce, duck or lamb ragout. But as it was, the pairings were informative and took me back to my chef days.

Then I took another sip of the 1967 Barolo and closed my notebook.