In various forms, the old saw about family business is: The first generation builds it, the second enjoys it, and the third destroys it. Italy’s Tommasi family, however, never lived up to that.

In 1902, Giacomo Tommasi began the family wine business with the purchase of the 12-acre Rafael vineyard in Pedemonte, a village in Veneto’s Valpolicella Classico area. Each subsequent generation enlarged the family’s holdings, and now Tommasi has 475 acres between Valpolicella Classico and the adjacent Verona appellation. From the former, Tommasi makes its acclaimed amarone.

The last member of the third generation, the very active 71-year-old Dario Tommasi, is in the office every day guiding the nine cousins of the current (fourth) generation in the family’s expansion beyond the borders of Veneto and the wine business.

Cousins Michela and Barbara Tommasi are directors of the hospitality business that includes Villa Quaranta, a business-oriented hotel and spa in the heart of the Valpolicella area; the 16-room boutique Albergo Mazzanti, near the Casa di Giulietta (Juliet’s House) in Verona’s historic center; and a casual restaurant, Antico Caffe Dante. Farther from their Veneto base is Poggio al Tufo, an agriturismo (think farmhouse B&B), situated at Tommasi’s Tuscan vineyard in the Maremma appellation.

But wine remains Tommasi’s core, and seven members of the current generation are devoted to it, with the 42-year-old Giancarlo as winemaker, and the 41-year-old, multilingual Pierangelo as the managing director.

Since 1997, when the fourth generation acquired vineyards in Maremma—the family’s first outside of Veneto—the original winery has added 166 vineyard acres in the Valpolicella Classico area. Other holdings include: Tenuta Caseo, a 290-acre pinot noir property in Lombardy; Masseria Surani, a 200-acre estate in Puglia, the heel of Italy’s boot-shape; and its most recent purchase two years ago of Podere Casisano in Brunello di Montalcino.

As we sat down in the tasting room above Tommasi’s Valpolicella aging cellars, Pierangleo said Tommasi maintains its traditional amarone winemaking roots with the use of 3,000 to 6,000 liter Slavonian oak casks (botti), and drying the grapes in a fruittaio (fruit house) after harvesting for up to 100 days.

Making amarone requires drying the grapes to the point of being raisin-like, a process called appassimento. Traditionalists do this on straw trays (called arele in the Veronese dialect) in the lofts of the winery or the fruittaio. But some, including Tommasi, use plastic boxes for the ease of transporting the grapes from the vineyard and stacking in the drying rooms (of course, amongst the purists, there is some controversy about using the modern plastic boxes).

We started with the newest wine on the market, the 2012 Tommasi Amarone. This young wine is showing lively cherry and cedar aromas, tasty cherry and herbal flavors with integrated tannins, and a long, pleasing finish. The idea that amarone is a big, overpowering wine is dispelled by this wine’s medium body and balance. 90 points. Widely available, retails prices range from $48 to $105, shop accordingly.

A more intense cherry and strawberry-scented 2009 Tommasi Amarone reflects this vintage’s hot growing season, which delivered very ripe, black-cherry and licorice flavors that are irresistibly appealing. Throughout many parts of Italy (and France) the hot 2009 vintage created rich, fruit-flavored wines that you want to drink now. 91 points. Retail prices range from $65 to $80.

While the vines had extreme heat in 2009, they had excessive rain in 2008. But amarone’s appassimento procedure is the winemaker’s “get out of jail” card in such a vintage.

Giancarlo played his card very well with the flavorful 2008 Tommasi Amarone. More linear than the robust 2009, the 2008 red-plum and black-cherry-flavored fruit is lined with soft tannins, giving the wine a round mouthfeel and instant drinkability. 89 points. A few retailers offer this vintage and proper storage is critical; expect to pay about $75.

Tommasi’s style of bright crimson to ruby red-colored wine, with attractive fruit aromas and flavors wrapped around a medium body, was front and center in the 2007 Tommasi Amarone. Very tasty—one could say juicy—red-plum and cherry flavors are supported with integrated tannins. This vintage is eminently drinkable and possesses the structure for giving many more years of pleasure. 91 points. If you can find a retailer with this decade-old bottle, make sure it has been stored properly, and expect to pay about $100.

Along with the business expansion, in 2007, Giancarlo created the first Tommasi amarone riserva, Ca’ Florian. The family considers this hilltop single-vineyard to be its best plot of corvina, corvinone and rondinella, the three grapes used in the Ca’ Florian amarone (the nonriserva, called normale in Italian, includes oseleta in the blend).

While Ca’Florian spends its first year aging in French oak barrels, then three years in the traditional Slavonian oak cask, Pierangelo said they still consider it a traditional style amarone. To paraphrase a well-known expression, I think that’s “a barrel too far.”

Pierangelo said the Ca’ Florian is directed to restaurants not retail stores. That being the case, I will limit my reporting of the three vintages I tasted, 2009, 2008 and 2007, to a general overview: The wines have more body and a slightly deeper color than the same three vintages of the nonreserva reviewed above.

Black-fruit aromas and flavors are dominant with integrated tannins. Each will provide delicious drinking and partner well with red meats, or pasta with meat ragout. For the record, I rated the 2009 and 2008 92 points. And the 2007 94 points.

While walking through the winery, Pierangelo proudly pointed out the 33,300-liter Slavonian oak cask that his generation built, and was recognized by the Guinness Book of Records as the largest wine barrel in use on earth. So, along with hospitality development, more Valpolicella vineyards, new wine estates in Lombardy, Tuscany and Puglia, this turbo-charged current generation has laid down another milestone for future generations to surpass. 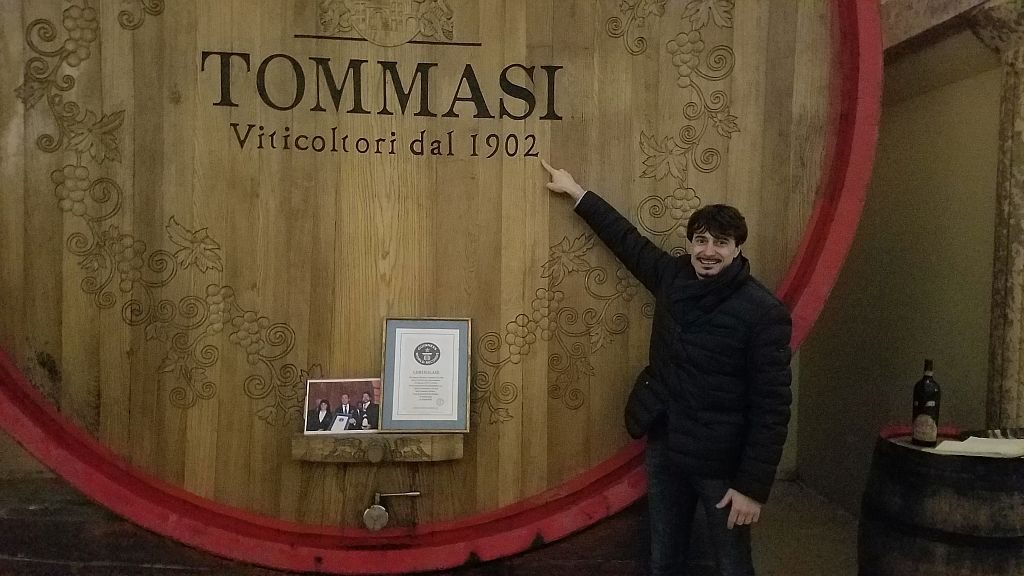 Pierangelo with the Tommasi 33,300-liter cask and the Guinness Book of World Records certificate.