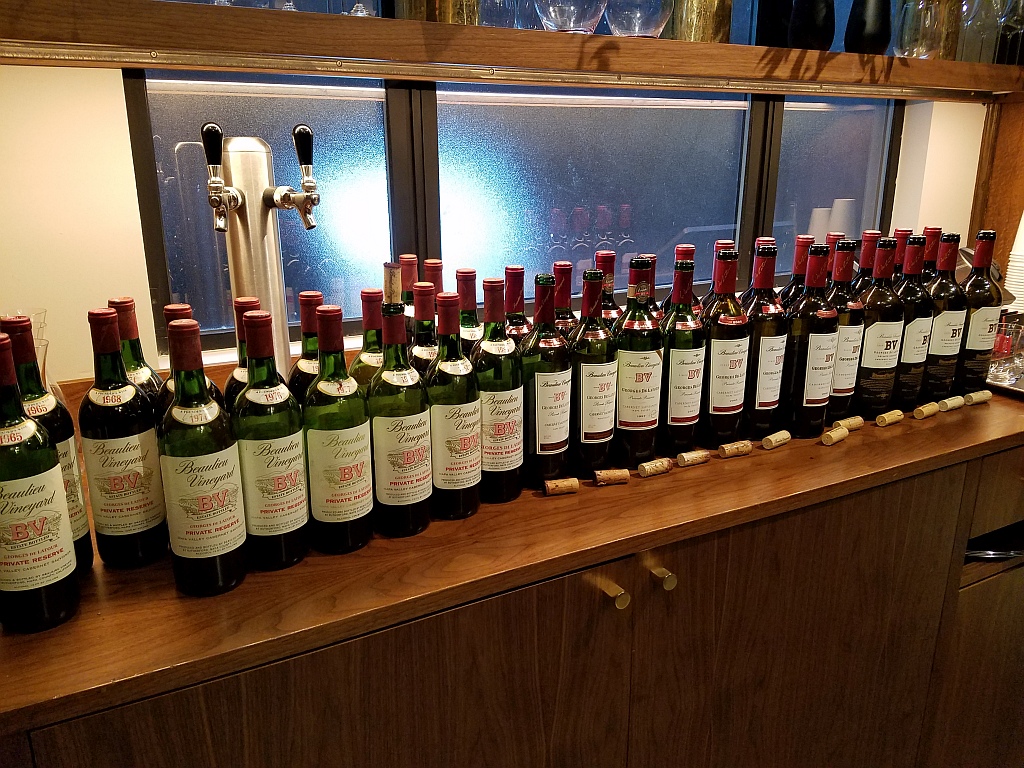 Some California wineries may have longer histories than Beaulieu Vineyard, but none has had as great an impact on American wine than this French transport.

Georges de Latour and his wife Fernande migrated from Bordeaux to California in 1883. Seven years later, they traveled to Napa Valley and upon seeing Rutherford, Fernande said it was beaulieu—“a beautiful place.” They purchased four acres.

Georges’ entrepreneurial spirit added hundreds of vineyard acres, which he named Ranches 1 and 2, and a wine business that thrived even during Prohibition—using a loophole, he sold “sacramental wine”—while other wineries folded.

In 1938, he returned to Bordeaux seeking a winemaker, and found one in 37-year-old Russian-born Andre Tchelistcheff (CHOL-a-cheff). Tchelistcheff was working at the French Agronomy Institute and doing research at the Pasteur Institute, but was convinced to come to Beaulieu Vineyard, where his education in oenology, fermentation and microbiology took BV and California winemaking into the modern era. While not exactly a household name, he is, of course, an iconic figure in that state’s wine history.

Tchelistcheff introduced many ideas that are part of today’s accepted winemaking and vineyard techniques: cold fermentation, aging the wine in small oak barrels, malolactic fermentation, vineyard management, clonal selection among them. Wines benefitting from those practices were displayed in a May tasting of Beaulieu Vineyard Georges de Latour Private Reserve Cabernet Sauvignon ranging from 1965 to 2016.

Trevor Durling, only the fifth person to lead Beaulieu’s winemaking team hosted the tasting. All the 20th-century bottles were opened for about 30 minutes and poured through a Coravin. The wines from the 1960s to the late 1980s were 100% cabernet sauvignon and aged in small 50-gallon American oak barrels for approximately two years.

We began with the 1965 and 1968, two vintages with which I was very familiar, as they were on my wine list in the 1980s at Le Delice restaurant. Both wines had 12.5% alcohol, the standard at that time. The 1965 surprised me with its fruit presence, and the 1968’s refined aroma and flavor reinforced my view that it was one of the greatest BV Private Reserves Tchelistcheff made. If you ever find this wine on a restaurant list, or at an auction where its provenance and storage conditions are listed, don’t hesitate to buy it. It is one of America’s great wines.

In our second tier, Durling presented the 1974, 1976 and 1977. These wines were made by Andre’s son Dimitri, who had his own illustrious winemaking career. (From 1973, Andre was a consultant to various California wineries, including Tom Jordan’s new eponymous winery in Alexander Valley.)

The alcohol levels of the 1970 wines were 13% to 13.5%. We began with the spectacular 1974 vintage. I finished my own last bottle of this wine around 2012, and recall that its rich, cabernet sauvignon taste had declined, but not passed away. At our tasting, the ‘74 had a slight tawny color and aroma, pleasing fruit flavor and a soft, round finish. It was a good example of how wines, like people, age differently.

The 1976 contained cabernet sauvignon grapes from two of Napa Valley’s great vineyards: To-Kalon and Beckstoffer. Its medium body was elegantly wrapped with blackberry, tobacco and leather aromas and flavors. I cannot recall what the 1976 Georges de Latour Cabernet Sauvignon Private Reserve was like during the time it was on my wine list, but I was certainly pleased by the condition and taste of the wine Durling presented. The 1977 was more familiar. It was California’s second consecutive drought year; so numerous tannic, unbalanced wines were made that year in Napa Valley. BV’s rendition surprised me with its black fruit and tobacco accents and flavors. While drinkable, it was a notch lower than the 1976 and two steps down from the 1974.

While Napa’s 1980 vintage offered many attractive wines, most peaked about 20 years later. The 1980 Georges de Latour had tasty blackberry flavor, mellow tannins and a very pleasing finish. It was in much better condition than other bottles of this wine I had at tastings during the last decade. The 1981 vintage was filled with lighter wines, including the BV Georges de Latour. Of the three wines, it was clearly the lagger.

Mother Nature gifted Joel Atkin with consecutive outstanding years from 1984 to 1987. Each harvest was splendid; consumers had only to choose their favorite style. Rich, opulent fruit anchored 1984, with 1986 following in its footsteps. In 1985, balance and elegant fruit flavors and texture mimicked the best of Bordeaux, followed closely by 1987. For me, it was the best of the four years. At our tasting, however, the 1985 BV Georges de Latour was light and seemed slightly oxidized, or, perhaps, a touch corked. In any case, it was not a good example of what was otherwise delivered that year.

The 1990s was a transition decade for Beaulieu as well as most of northern California’s wineries after a phylloxera attack in the late 1980s. (Phylloxera is the vine-killing insect that decimated Europe’s vineyards in the 1880s.) By the mid-1990s, BV and other affected wineries spent millions of dollars replanting their  vineyards with new rootstock and grape clones specifically designed to be resistant to the louse.

At this time, Napa wineries also ratcheted up the alcohol content, fruit intensity and new French oak barrel aromas and flavors in the pursuit of the Holy Grail scores by Robert Parker and Wine Spectator. With so much money at risk, who could blame them? But for anyone new to the wine world, they would have no idea that these wines were a world away from the wines of the 1960s to the early 1990s

The 1990 contains 3% merlot and was aged in equal parts American and French oak barrels for 20 months. It retains its blackberry color and herbal, menthol and black-fruit aromas. Savory blackberry and slight blueberry flavors with a soft texture and integrated tannins carry the wine to a delightful finish.

I had the 1995 BV Georges de Latour on my wine list at Sonoma Grill. I remember its upfront, mouth-filling fruit flavors and new-oak influence as a radical departure from all the Georges de Latour before it. At our May tasting, the wine retained its opaque color and black-olive and black-fruit aromas and tastes. It remains balanced and securely placed in the new style.

The 1997 vintage is the last of four consecutive outstanding years. It shares the 1995’s dark color and, like that vintage, it is 100% cabernet sauvignon. Pronounced blackberry, black-cherry and plum aromas and flavors are still lively with very good balance and length. And, like the 1995 BV, clearly a departure from BV’s historical mold.

previousSummer wines: from the serious to the playful