Unlike many chefs, Sota Atsumi wasn’t wearing the iconic white Bragard chef jacket with his embroidered name prominently displayed above the pocket.

In fact, he was so unassuming that if you didn’t know what he looked like, you would have thought the young guy working the line at the Chef’s Club in the dishwasher’s shirt, tending the racks of lamb and rapidly cutting them into single chops was just the meat cook.

But if you go to the Chef’s Club during the next three months and look closely, you’ll see Chef Atsumi not washing dishes, but picking delicate herbs from a bowl with his tweezers and placing each with exactitude on his kampachi ceviche. You’ll see he’s like a Japanese artist trimming a Bonsai tree. This chef knows that the eye has an appetite, too.

In 2006, the Tokyo-born Atsumi arrived in Roanne, France and the kitchen at Troisgros, the legendary three-star Michelin restaurant when he was 20 years old. (Troisgros received its third star in 1968 and a half century later, retains the celestial ranking unblemished by interruption.)

Four years later, Atsumi entered the Paris test kitchen of the world-renowned chef Joel Robuchon, who has his own galaxy of 32 Michelin stars in a dozen restaurants from Paris to Bangkok to New York. In 2012—still in Paris—Atsumi was appointed head chef at the lesser-high-octane casual Vivant Table bistro. In 2014, he led the kitchen brigade at the Clown Bar, a casual bistro in a historic Belle Époque building that once catered to the nearby circus. There, Atsumi gained attention for his cooking, which married Japanese precision and the French fare disciplined by those formative star-filled kitchens.

My first course of his current five-course menu was a perfect example: grilled white asparagus, confit rhubarb and Parmigiano cream. Atsumi placed two slivers of the shiny red vegetable on the top of a jumbo rocket-shaped asparagus, which in turn was lying on the parmesan-flavored cream sauce—something unmistakably learned only under the tutelage of French chefs. Its simplicity and deliciousness demand you to sit up and take notice.

Atsumi’s intense focus on the placement of each herb was the outward expression of an inner discipline that made the second-course kampachi ceviche so outstanding that I remarked to my partner Rose, “this is absolutely the greatest ceviche I’ve ever eaten.” The pinkish flesh of the Pacific Ocean jack fish was slightly sweet, but Atsumi elevated the dish by incorporating the juice of fermented tomatoes with the cubed fish into a delicious olive oil, lining the bottom of the bowl, and waiting for your unsuspecting palate to be saturated with its nectar. After every speck of the fish was devoured, my spoon scooped every drop of the sauce. I would have used a straw, if necessary.

Rose’s a la carte razor clams “a la mariniere” with fava beans and green asparagus was an ode to spring. Atsumi’s composition was as brilliantly green as Irish clover with barely cooked clams coated in an olive oil herb-infused dressing. Our forks moved in a tango between our two plates, but if truth be told, I praised Atsumi’s spring tribute to her so more kampachi would remain in my bowl.

The mild-flavored sea bream is not my favorite fish. But I knew I was going to eat every flake the moment my fork made it to my mouth. The butter-and-cream infused pureed potatoes made Joel Robuchon France’s most talked about chef in the 1980s. To this day, I recall the sheer decadence his potatoes created in his eponymous Paris restaurant. Under Atsumi’s sea bream, you’ll find the proof that he was an observant acolyte while working for Robuchon.

Perhaps, it was the speed of cooking all the racks of lamb, or the cooking technique used, but the fourth course disappointed. My lamb chop wasn’t trimmed of the strip of thick gelatinous fat found above the lamb’s rib cage, nor was it browned from roasting. Cutting the meat, I felt its mushy texture and chewing confirmed it didn’t spend enough time in a hot oven for the meat’s fibers to firm up. The chop had the hallmarks of sous-vide cooking, which to my mind is not cooking at all. 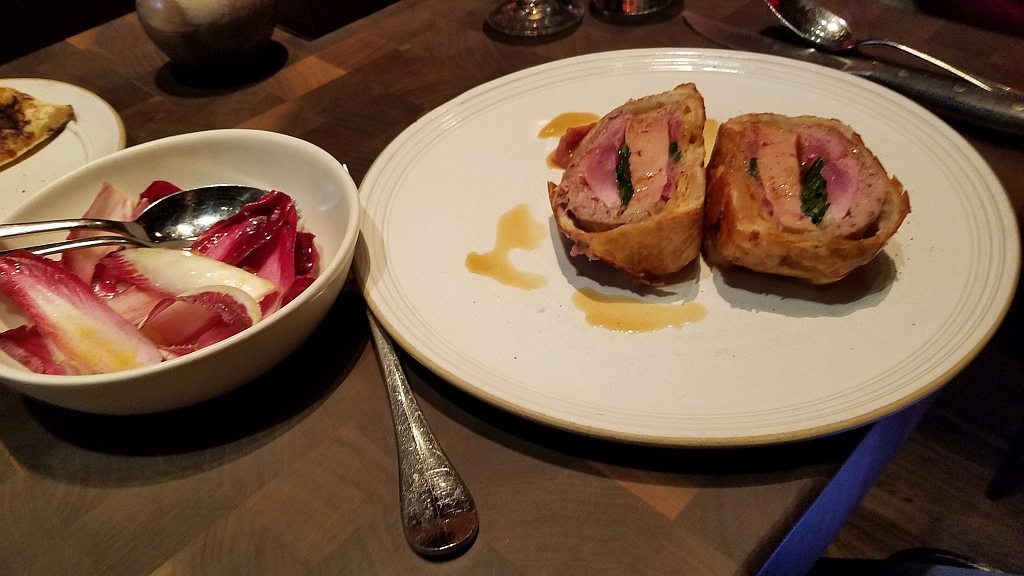 But the luxurious Duck Pithiviers beckoned from Rose’s plate. The mahogany-colored round crust holding the beautiful pink duck meat and satiny foie gras was a feast for the eyes. Its exquisite rich meat flavors were instantly tasted, then repeated in the juices absorbed by the ethereal pastry crust. It rekindled my memory of eating at Triosgros during a period when I made annual gastronomic pilgrimages to France’s three-star Michelin restaurants. For this dish alone, you should be sitting at a table during Atsumi’s residency.

I’m sure you have met couples that you find enjoyable together, but not on an individual basis. That was my reaction to the Chocolate Chiffon Cake. Atsumi married marjoram ice cream to a flaky chocolate pasty shaped like a tall ship. The would-be sails were luscious, but the marjoram ice cream brought herbal bitterness. However, if you marry the two on your spoon, you’ll find the rich, earthy chocolate makes the marjoram friendlier.

Rose’s Blood Orange Pavlova needed no coupling. It was delightful on its own. The white meringue shell was the backdrop for the brilliantly red strawberries, and raspberry-beet sauce. Atsumi created a yin-and-yang effect by offsetting the fruit’s natural sweetness with the slightly sour buttermilk ice cream. It should be required in your daily diet.

Behind the bar is a huge mirror similar to those adorning Paris bistros. The French mirror usually has the daily specials and wines by the glass scrawled or otherwise posted on it. On the Chef’s Club mirror, Atsumi inscribed, “I’ve dedicated my life to cooking.”

And, that’s about as big of an advertisement as you’ll get from this modest chef in the dishwasher shirt, but who, without doubt, has earned the right to wear the Bragard chef jacket with all its embroidery. 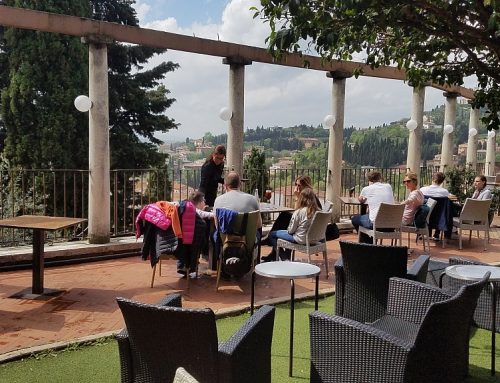 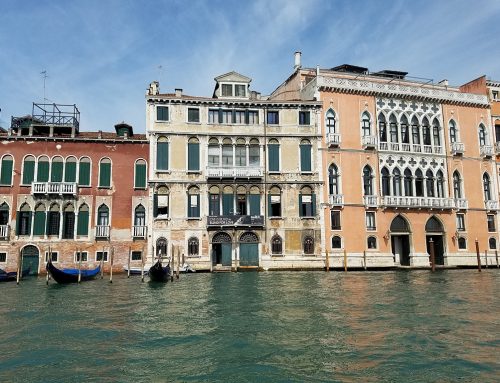 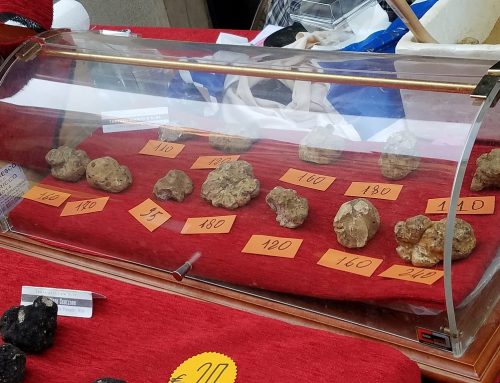 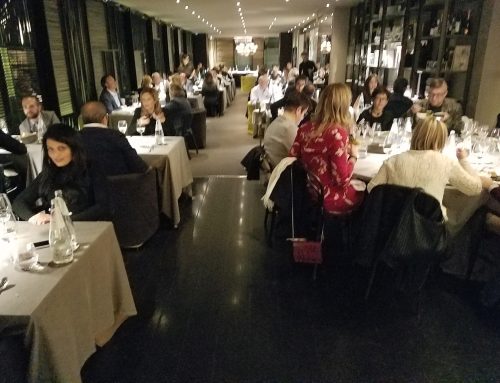 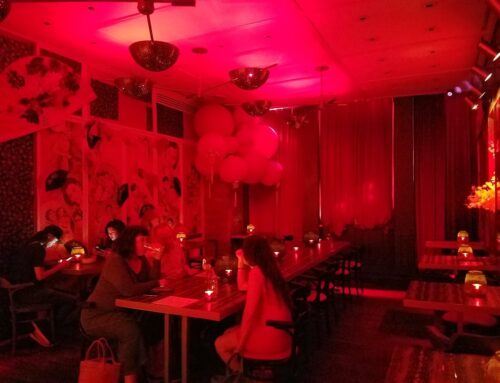 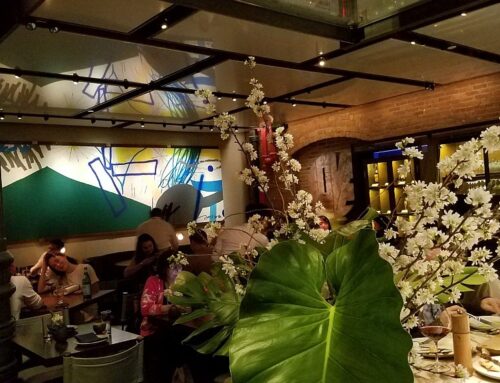