In the past, the idea of a connoisseur’s wine labeled kosher for Passover was an anomaly, but, today well-made kosher wines are part of our life.

Wine has a symbolic role in the Jewish faith. At the Passover Seder, four cups of wine mark Jews’ celebrating their freedom from Egypt. While the story of the Passover Seder is eternal, kosher wine itself has evolved from simply celebratory to high quality. This change was vividly displayed at a recent luncheon with winemaker Victor Schoenfeld of Israel’s Golan Heights Winery.

At your Passover table (and afterward), you’ll be delighted with a glass of the 2009 Yarden Blanc de Blancs Brut sparkling wine. Made from chardonnay planted in 1976, Schoenfeld employed the Champagne recipe of making the second fermentation in the bottle (this creates the bubbles), followed by five years aging.

The sparkling wine’s dry, mineral—some might say chalky—backbone is from the vineyard’s volcanic soil. Grown in the Golan’s most northern, highest and coldest region of Israel, the chardonnay brings mild citrus, almond and sage aromas and flavors riding on a line of acidity. Schoenfeld kept the sugar level to a low five grams in line with the best contemporary Champagnes. While I enjoyed it as an aperitif, it was excellent with a tuna tartare at Manhattan’s revamped Union Square Café. 89 points. Retail pricing range from $27 to $35.

American Champagne and sparkling wine drinkers have an unquenchable thirst for rose’. A blend of chardonnay and pinot noir, the faintly red-colored 2011 Yarden Rose’ Brut will add to the desire. The chardonnay grapes are from the same vineyard as the blanc de blancs, contributing the chalky, mineral backbone, while the pinot noir adds a mild red-fruit accent to the aroma and flavor. Pleasing on its own, the rose’ brut will make a good partner with smoked salmon presentations from an hors d’oeuvres of taramarsalata-style dip to an appetizer rosti potatoes with shredded smoke salmon and horseradish cream sauce  88 points. Price range is $30 to $34.

Gewurztraminer might be the most controversial grape in the world. Its pungent aromatics and multitude of flavors cause some people to flee, while others find it magnetic. The 2016 Yarden Gewurztraminer will not change that reaction.

The wine billows floral, honey and honeysuckle aromas. The slightly off-dry, pronounced honey, white nectarine and apple flavors that might be too much for some, but welcomed by others who recall the sweet wines of their childhood Passover Seders. The 2016 Yarden Gewurztraminer will be ideal with roasted chicken legs seasoned with lemon, marjoram and touch of cayenne pepper or red-pepper flakes. 88 points.  A good value at $16 to a reasonable $21.

The 2015 Yarden Katzrin Chardonnay is for those who like their chardonnay big, bold and oak-influenced. The wedding-band gold-colored wine brings a vanilla scent from nine months of oak barrel aging, a buttery aroma from full malolactic fermentation, and a full body from the battonage (a winemaking technique of stirring the lees–spent yeast cells—while the wine was barrel aging).

I’ve objected to this over-the-top style to Yarden, but I also realize there is a market for it. Fortunately, I was spared the high alcohol that attacked me in the past,

Schoenfeld described the oak as being “like a frame on a painting.” But as everyone in the art world knows, the frame is not to distract the eye from the painting. Excessive oak does precisely that to the palate’s reception of the chardonnay fruit. 85 points. $27 to $40.

Union Square Café’s chef matched these two pungent wines with a high-flavored frascatelli, asparagus, crabmeat and lemon mascarpone pasta presentation. It was a culinary feat. For Passover, I’d suggest a lettuce salad with avocado, mango, orange sections and cucumber with a grapefruit dressing.

The Passover Seder often includes a braised lamb shank or beef brisket; either will be flattered with the 2013 Yarden Cabernet Sauvignon.

The wine’s smoky scent from the toasted oak barrel fades with aeration, revealing black-tea, black-pepper and blackberry aromas. Blackberry dominates the flavor and noticeable tannins and dark, bitter chocolate taste in the finish requires at least 30 minutes aeration. 92 points. Pricing ranges from a good value $22 to an excessive $44. 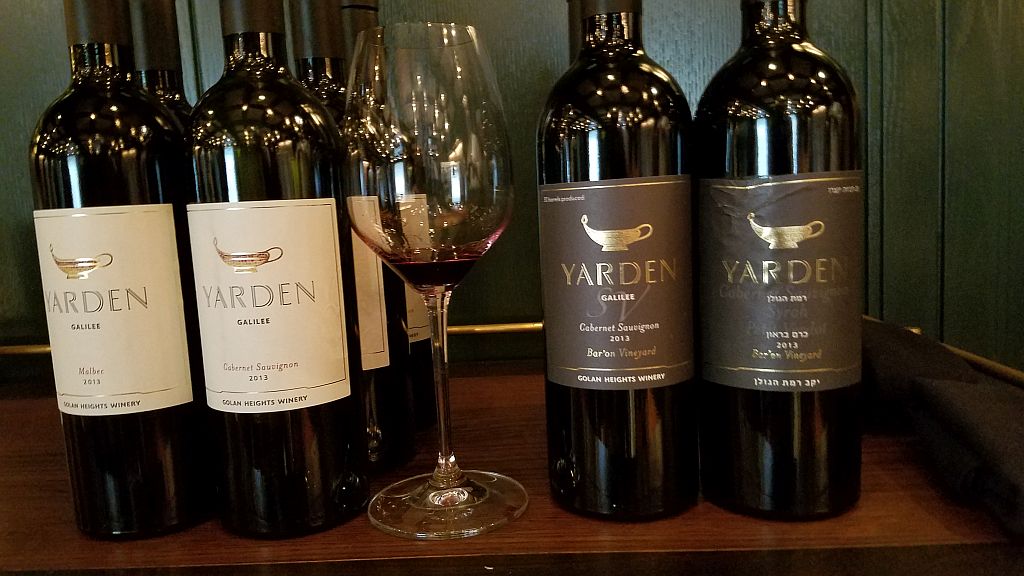 An alternative to the firmly structured cabernet sauvignon is the fruit-forward 2013 Yarden Malbec–only the second time Yarden has made a pure malbec wine. With aeration, the earthy, smoky aroma recedes and the its juicy black-cherry fruit flavor steps to the fore. 88 points.  A reasonable $29.

And don’t hesitate to purchase extra bottles, as these are wines you can serve anytime of the year.