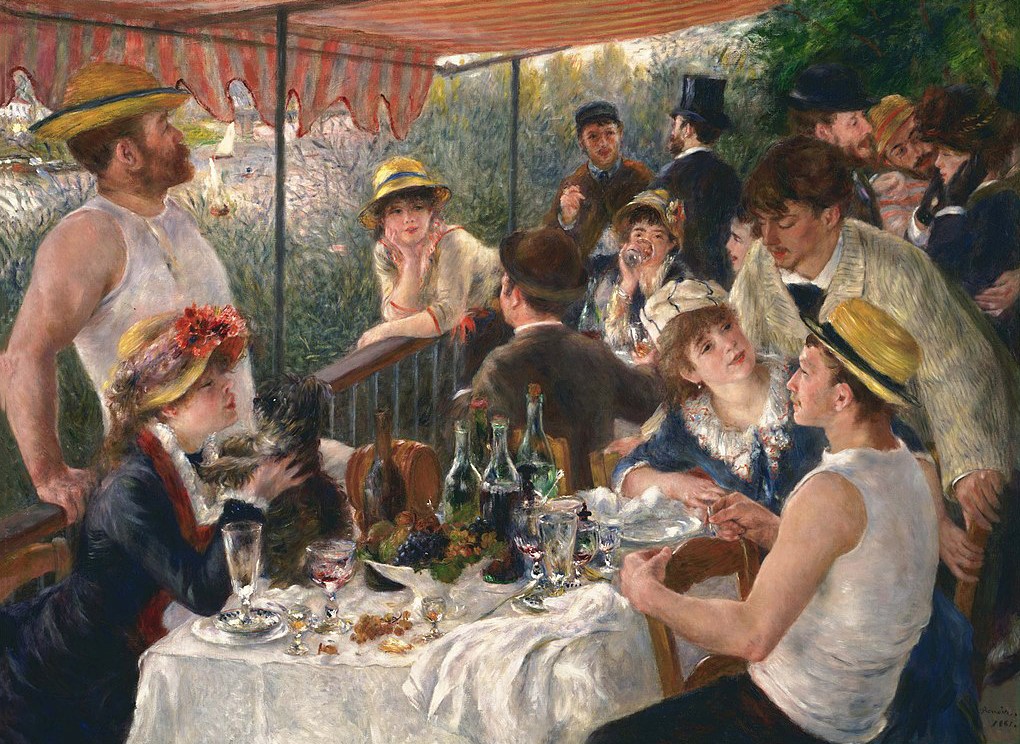 If the isolation of staying in place makes you feel that you are living in a Edward Hopper’s “Nighthawks” painting, let these wines transport you to the joie de vivre of Renoir’s “Luncheon of the Boating Party.”

Start with the lithe chardonnays of Burgundy, which in these times are simply joyous. And the 2017 William Fevre Chablis and Bouchard Pere et Fils Cote de Beaune white burgundies play their parts well.

Bouchard purchased the Beaune Clos Saint-Landry Premier Cru vineyard in 1791. Its five acres are planted with chardonnay in limestone and clay soils. The 2017 Bouchard Beaune Clos Saint-Landry has a goldish tint, floral aroma and mouth-filling ripe fruit flavor with light acidity. It is eminently drinkable. 90 points. Retail prices range from $55 to $90.

The 2017 Bouchard Meursault Les Clous was limited to 15% new-oak barrel aging to preserve the mild acidity that underlies the rich, white peach and pear flavors that are instantly likeable. 90 points. Retail prices range from $45 to $90.

In 1909, Bouchard acquired 60% of the prestigious grand cru vineyard Le Corton. Its rare designation permits owners to plant chardonnay or pinot noir; Bouchard planted its nine acres with only chardonnay, making its Corton-Charlemagne the third-largest plot in the appellation.

The 2017 Bouchard Corton-Charlemagne Grand Cru releases enticing floral, white fruit and vanilla aromas, and the rich, mouth-filling apple and pastry-cream flavors are enhanced and supported by the minerality generated from the limestone soil. While pleasing today, its structure permits aging for many delightful tomorrows. 93 points. Retail prices range from $159 to $250, and priced at less than $200 in many stores.

After Montrachet, Chevalier-Montrachet is considered Burgundy’s second-greatest white-wine vineyard. Its 17.5 acres run horizontally above Montrachet, divided into four terraces with different subsoils. During the 19th century, Bouchard acquired several plots that span the four terraces and with nearly six acres, it is the appellation’s largest producer.

The 2017 Bouchard Chevalier-Montrachet Grand Cru has substantial citrus character interwoven with apple and pear aromas and flavors. A pleasant minerality runs through the wine and soft acidity allows for youthful drinking. 92 points. Retail prices range from $329 to $400.

Many wine consumers are unaware that Chablis is part of Burgundy as it lies at Burgundy’s northernmost point, closer to Champagne than the city of Beaune.

Winemakers in the Cote de Beaune region use oak-barrels for fermentation and aging much more than their peers in Chablis, who employ stainless-steel tanks as their principal vessel. Warmer temperatures in the Cote de Beaune add richness, and Chablis’ chalky and limestone soils instill vibrant acidity and a leaner mouthfeel.

William Fevre owns 192 acres of vineyards in Chablis, including 39 acres of premier cru and 37 acres of grand cru. Since 2006, all the vineyards are farmed organically and since 2010, some are farmed biodynamically.

Winemaker Didier Seguier always starts the harvest in the nine-acre Vaillons premier cru vineyard. The 2017 William Fevre Chablis Vaillons Premier Cru is made from grapes grown in four parcels that yielded a vanilla-scented and pear-flavored wine with good body and immediate drinkability. 89 points. Retail prices range from $49 to $65.

In April 2017, a spring frost destroyed 15% to 70% of the vines in many premier and grand cru vineyards. The 2017 William Fevre Chablis Fourchaume Premier Cru suffered a 50% lost, which required purchasing some grapes. The 2017 Fourchaume has honey and lemon fragrances and flavors, and good body. The wine’s shortfall was a flabby finish. 89 points. Retail prices range from $49 to $74.

The 2017 William Fevre Chablis Montmains Premier Cru is 100% estate wine. Fevre‘s nine-acre parcel contains chalky clay, marl and limestone soils mixed with oyster fossils from the Kimmeridgian era. Its floral and very ripe pear and apple aromas and flavors have a line of minerality giving the wine structure and a pleasing finish. 90 points.  Retail prices range from $45 to $68.

The 2017 William Fevre Chablis Montee de Tonnerre Premier Cru is made from estate and purchased grapes after its five and half acres suffered in the spring frost. Montee de Tonnerre is close to the grand cru vineyards Les Clos and Blanchot and its mineral backbone makes it less fruity than the other premier crus in this tasting. Its pear and apple flavors are well balanced with the minerality, giving this wine a long finish and greater aging potential than the other premier crus. 93 points. Retail prices range from $60 to $85.

The Chablis grand cru appellation is a single entity composed of seven continuous vineyards running along the right bank of the Serein River in the Chablis village. Planted at 400 to 975 feet, the vineyards are characterized by marl and Kimmeridgian limestone with fossilized oyster shell fragments that date to the Upper Jurassic era, some 150 million years ago

The 2017 William Fevre Chablis Bougros Grand Cru and Cote Bouguerots Grand Cru are made from Fevre’s parcels, which comprise 49% of the Bougros grand cru vineyard. The Cote Bouguerots bottling is from two plots nearer to the Serein that keeps the southern-facing vineyard cooler in the summer and gives it a higher level of acidity. The 2017 Cote Bouguerots has a fresh, lemon-y aroma and flavor, and a tangy citrus-like finish. 91 points. It is priced from $89 to $125. The 2017 Bougros is more fruit-driven and mineral. 90 points. Retail prices range from $79 to $121.

The instantly drinkable 2017 William Fevre Chablis Les Preuses Grand Cru, produced from a vineyard lying above Bougros, has a more floral aroma. Its very ripe apple and pear flavors with a round, rich mouthfeel evoke a New World chardonnay. 89 points. Retail prices range from $99 to $149.

Fevre has 10 acres spread across four parcels in the 64-acre Les Clos grand cru vineyard. Its soil is a mixture of compressed fossils and stones on a layer of limestone. The 2017 William Fevre Chablis Les Clos Grand Cru has the mellowest nose of the grand crus. White peach and apple flavors have a pleasant mineral aftertaste and the finish is harmonious, making this, in my opinion, the best balanced grand cru of the lot. 90 points. Retail prices range from $110 to $170.

Whether you lean toward a more stark mineral-driven Chablis (like a Hopper painting) or a warmer-climate Burgundy, full of fruit aromas and flavors from summer’s sunshine (channeling Renoir’s happy table), you’ll find an artistic chardonnay deserving of your attention.

previousThis is a Time to Explore