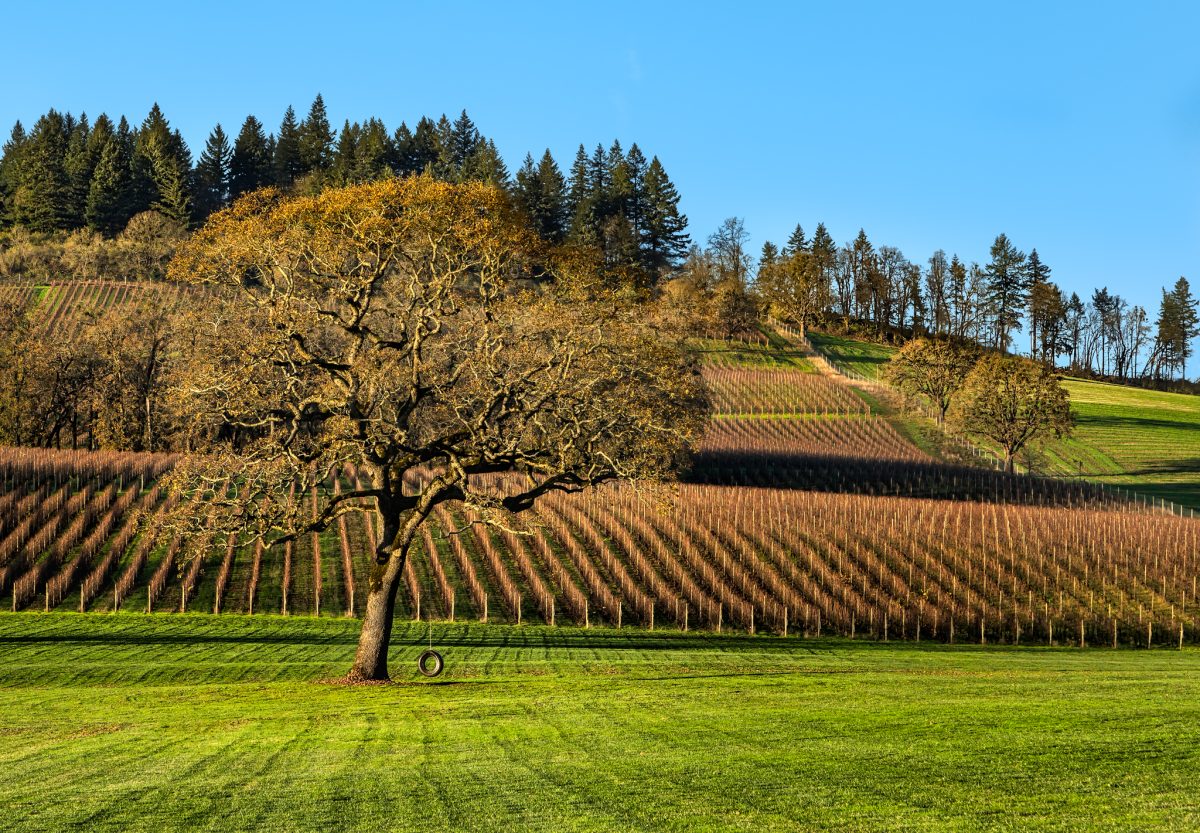 History buffs know that the Oregon Trail stretched from what is now the state of Kansas to Oregon’s Willamette Valley. We pick up the trail in 1965 when visionary David Lett ignored all the naysayers in the California wine business and drove to Willamette Valley to plant pinot noir.

Over the ensuing half century, Oregon’s cool climate and soils proved so compatible for pinot noir that today it rivals Burgundy—the apex of pinot noir—and attracts wine producers from all corners of the globe. Its magnetic pull is Willamette Valley, where 18th-century pioneers and Lett put down roots, and 21st– century wineries continue to plow.

The acclaimed South African Hamilton Russell winery is the newest kid on Oregon’s pinot noir block. Its owner, former advertising executive Tim Hamilton Russell, established his South African winery in 1975 on 425 undeveloped acres in Hemel-en-Aarde village. He planted the first vines in the area, and shortly gained international recognition for his pinot noir and chardonnay wines.

In 1993, his son Anthony Hamilton Russell, who assumed control of the winery two years earlier, made his first trip to Oregon, which eventually blossomed into Hamilton Russell Oregon pinot noir with the 2018 purchase of grapes from Eola Amity Hills and Ribbon Ridge vineyards, two subregions of Oregon’s coveted Willamette Valley.

The 2018 Hamilton Russell Oregon Bramble Hill Ribbon Ridge Pinot Noir opens like a flower in sunshine. An hour of aeration in a decanter changes the wine’s slick vanilla extract and blackberry nose to an elegant black-cherry scent, while its full body evolves from black-plum flavor to rhubarb and cherry flavors. Throughout the time lapse, the wine retained its mineral backbone. 92 points.

The 2018 Hamilton Russel Oregon Zena Crown Eola-Amity Hills Pinot Noir is strikingly different than its Ribbon Ridge sibling: a translucent cherry hue, and cherry and strawberry aromas introduce a featherweight that delivers an explosive punch of black-cherry and cranberry flavors. Its bright acidity carries this well-made wine to a long, pleasing finish. 93 points.

This first release of Hamilton Russell Oregon pinot noirs is limited to a combined 2,400 bottles. Expected the cost to be about $85.

The 2015 Angela Estate Vineyard Pinot Noir has the Ken Wright style: ripe fruit aromas and flavors, plush texture with soft integrated tannins, and a long, rich fruit flavor finish. It’s the style Wright developed at Panther Creek, his first Oregon winery in the latter part of the 1980s. Critics and consumers loved it, and Wright continued it at his next venture, Ken Wright Cellars and for clients such as Domaine Serene. I had the latter wine, and many of Ken Wright Cellars’ single-vineyard pinot noirs on my former restaurant wine list. They were perfect restaurant wines as they required little aging time.

The 2015 Angela Estate Vineyard pinot noir delivers a seamless stream of ripe black-cherry aroma and flavor layered with a mild vanilla undercurrent, riding on velvety tannins. The wine is polished and pleasing from the first sniff to the last sip. This is Ken Wright—the maestro of Oregon pinot noir—producing another winning performance. 91 points. Retail prices range from $29 to $40.

In 1982, Montinore Estate was founded in northern Willamette Valley by the Graham family, who made their first wines in 1987. A decade later, they hired Rudy Marchesi from New Jersey’s Alba Vineyards as a consultant. Marchesi initiated organic and biodynamic farming in 2003 and when the Grahams retired, he purchased the estate in 2005 and converted the 200 acres to biodynamic cultivation. It was certified by the world-leading Demeter organization in 2008, making Montinore the second-largest biodynamic vineyard in America.

Along with winemaker Stephen Webber, Marchesi uses the 200 acres to produce a mind-boggling nine varietal wines many with multiple bottlings. Pinot noir comprises 10 selections, including port and rose wines. One wonders if they ever sleep.

Recently, I enjoyed the 2017 Montinore Red Cap Pinot Noir made from blending grapes from different estate vineyards. Its delightful bright cranberry and cherry aromas and flavors, light body and crisp acidity makes it a perfect summer wine. Serve it slightly chilled with grilled chicken, or a plate of salami and prosciutto. 88 points.  Retail prices run from $15 to $25; it’s especially good value at less than $20.

Pinot noir is Willamette Valley’s destiny. From David Lett’s first planting in 1966 at Eyrie Vineyards, 564 wineries have sprouted, producing 82% of Oregon’s pinot noir.  No doubt, the wagon-train pioneers would be astonished at what developed from their log cabins and farms.