Boizel Champagne is a welcomed addition to the American Market

Boizel Champagne is a welcomed addition to the American Market

This fall, Evelyne Roques-Boizel introduced her family’s excellent Champagnes to the American market in the private dining room of Manhattan’s Ai Fiori restaurant.

Back then, making Champagne was a high-risk business: Little was understood about the interaction of sugar and yeast for the second fermentation that creates the wine’s bubbles, and bottles were constantly exploding from the inability of the primitive glass to hold the wine’s atmospheric pressure.

But youthfulness is often the ingredient that overcomes obstacles, and the young couple’s determination brought success.

The marriage produced a son, Edouard, who joined his winemaker father, which changed the name of the company to Boizel Pere et Fils. In 1865, Edouard married Adele Camuset, a descendent of the Camuset Champagne house. At the time, Champagne was made very sweet, but for the English market the couple created a nonvintage brut, and dry vintage Champagnes.

In the early 20th century, Edouard’s son Jules entered the business (Edouard would live to be 96—its own recommendation for Boizel Champagne, I thought as Evelyne was recounting the history). In 1929, with his wife Louise, they created an uncommon wine at the time: the first Boizel Blanc de Blancs made of only chardonnay grapes.

The union of Jules and Louise produced Rene’ who was a champion rower in his youth. The discipline of competitive sports was a trait he needed when handed the company after the economic and physical destruction brought by the Great Depression and World War II.

With his Dutch wife Erica, they developed new markets in Belgium, the Netherlands and West Germany. And in 1961–one of the greatest vintages for French wine in the 20th century–Boizel created its Cuvee Speciale Joyau de France, so-named because Rene called the best wines jewels of the cellar.

In 1972, tragedy struck the Boizels with the successive deaths of Rene’ and his son Eric. Dropping other careers, 22-year-old daughter Evelyne, and her husband Christophe Roques, returned to Champagne to assist her mother.

As they gained their footing in the Champagne business, Evelyne and Christophe created the barrel-fermented and-aged Cuvee Sous-Bois in 1990, and in 2000 the first Joyau de France Rose’. 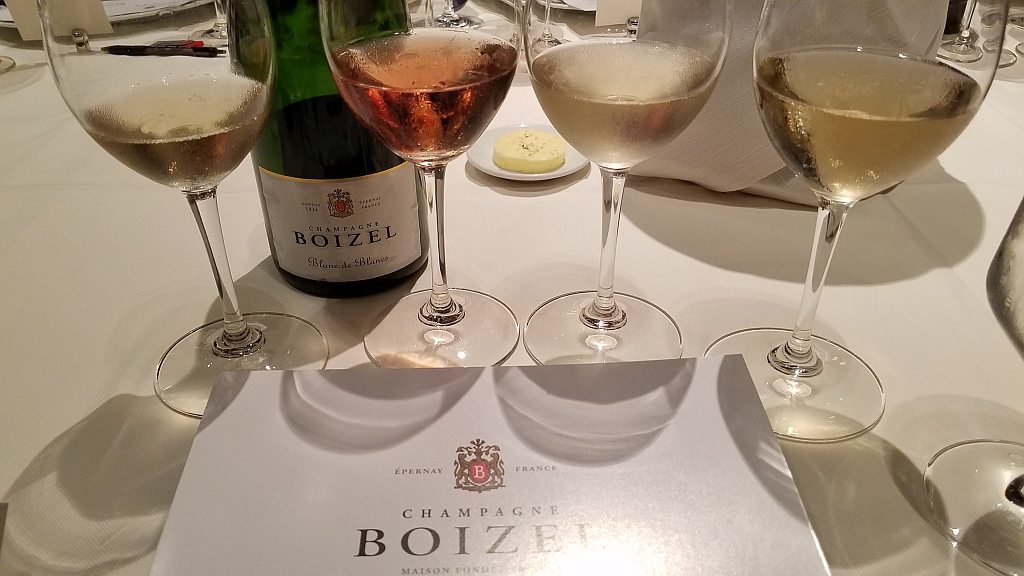 Before Ai Fiori’s chef sent the appetizer of raw fluke bejeweled with American sturgeon caviar, Evelyne presented the nonvintage Boizel Brut Reserve, delivering scents of fresh bread and lemon and flavors of lemon chased by crisp acidity and a chalky backbone. Alongside it was the bright-orange nonvintage Boizel Rose with its floral scent and round cherry and orange flavors gliding to a long, pleasing finish. Both were well made and aged three years in the bottle—more than double Champagne’s nonvintage requirement. 88 and 89 points, respectively. Retail prices for the brut are $33-$50; the rose can be found for $46-$63.

Then, Evelyne introduced the nonvintage Boizel Blanc de Blancs made only from grapes of premier and grand cru vineyards of the Cote des Blancs, Champagne’s finest area for chardonnay. Richness and elegance are the essence of Cote des Blancs Champagnes, echoed in the blending of opulent fruit of 2009, with the harmonious 2008 and balanced 2010. It was aged four years in the bottle, more than three times the legal requirement. 91 points. Retail is $58-$69.

These three nonvintage wines have a dosage of eight grams of sugar per liter—the middle range for brut—whereas the nonvintage Boizel Ultime has no dosage at all. Normally, I find zero dosage Champagnes too astringent; but Ultime’s tartness was tamed by its rich fruit flavors and six years of bottle aging. 90 points. Retail is $70-$84.

Of the four Champagnes, the Ultime was the best partner to the appetizer: The absence of a dosage and its minerality cut the oiliness of the caviar and lifted the mild fluke flavor. The nonvintage brut and blanc de blancs were good mates to the fluke without the caviar. The nonvintage rose’ was mismatched with my appetizer, but would be a good friend to a tomato and watermelon salad.

Evelyne introduced the Boizel Grand Vintage 2007 whose blend changes year to year. For 2007 it is half pinot noir, 40% chardonnay and 10% pinot meunier.

In 2007, the vines flowered a month early thanks to a hot, sunny spring. Then, a summer of cool, rainy weather stopped the grapes’ development until the sun returned in the last week of August. A dry, sunny September saved the vintage.

After fermentation and blending, the 2007 Grand Vintage is aged for a stunning eight years—not only beyond Champagne’s three-year requirement, but longer than prestige cuvees of other houses—and bottled with a six-gram dosage. All this exacting work created a full-bodied Champagne with rich, croissant and pear aromas and intense flavors of honey, pastry cream and toasted cashews elevated by the fresh citrus-like acidity carrying a delicious lemon-y finish. This is a first-rate Champagne that speaks volumes about Boizel’s craftsmanship in a difficult year. 94 points. Limited retail distribution $83.

Made only in exceptional years, the Boizel Joyau de France Blanc 2000 was the show-stopper of the presentation. The year dictates the blend, and in 2000 it is 65% pinot noir and 35% chardonnay (pinot noir will always take the lead over chardonnay), and has a six-gram dosage.

But the mind-boggling facet of the 2000 Joyau de France Champagne is that it was aged for 14 years before coming to market. At one end of the aging process for prestige cuvee Champagnes is the renowned Louis Roederer Cristal Champagne, aged only five and a half years (not nearly long enough) and at the other end are Henriot’s Enchanteleurs, Taittinger’s Comte de Champagne, Pol Roger’s Cuvee Sir Winston Churchill aged for about 10 years (and possessing great complexity).

I was thinking of these Champagnes when I inhaled the honey, caramel (found in Enchanteleurs), baked bread (associated with Comte de Champagne), and toasted almonds aromas. Its full body recalled Cuvee Sir Winston Churchill, and carried delicious honey, mango, lemon tart flavors that had the amazing duality of intensity and lightness. At that moment, I knew I was going to add the 2000 Boizel Joyau de France to my cellar. And it will not stay there 14 years, I can assure you. 96 points. Limited retail distribution $115-$123

Both vintage Champagnes were superb on their own and even better with Ai Fiori’s main course of halibut with vegetable caponata and zucchini puree.

Champagne has a history of notable women from the widow Veuve Clicquot to Madame Bollinger who ran Champagne houses with distinction and success. Evelyne Roques-Boizel changed her life’s mission in the early 1970s and has joined that pantheon of women. 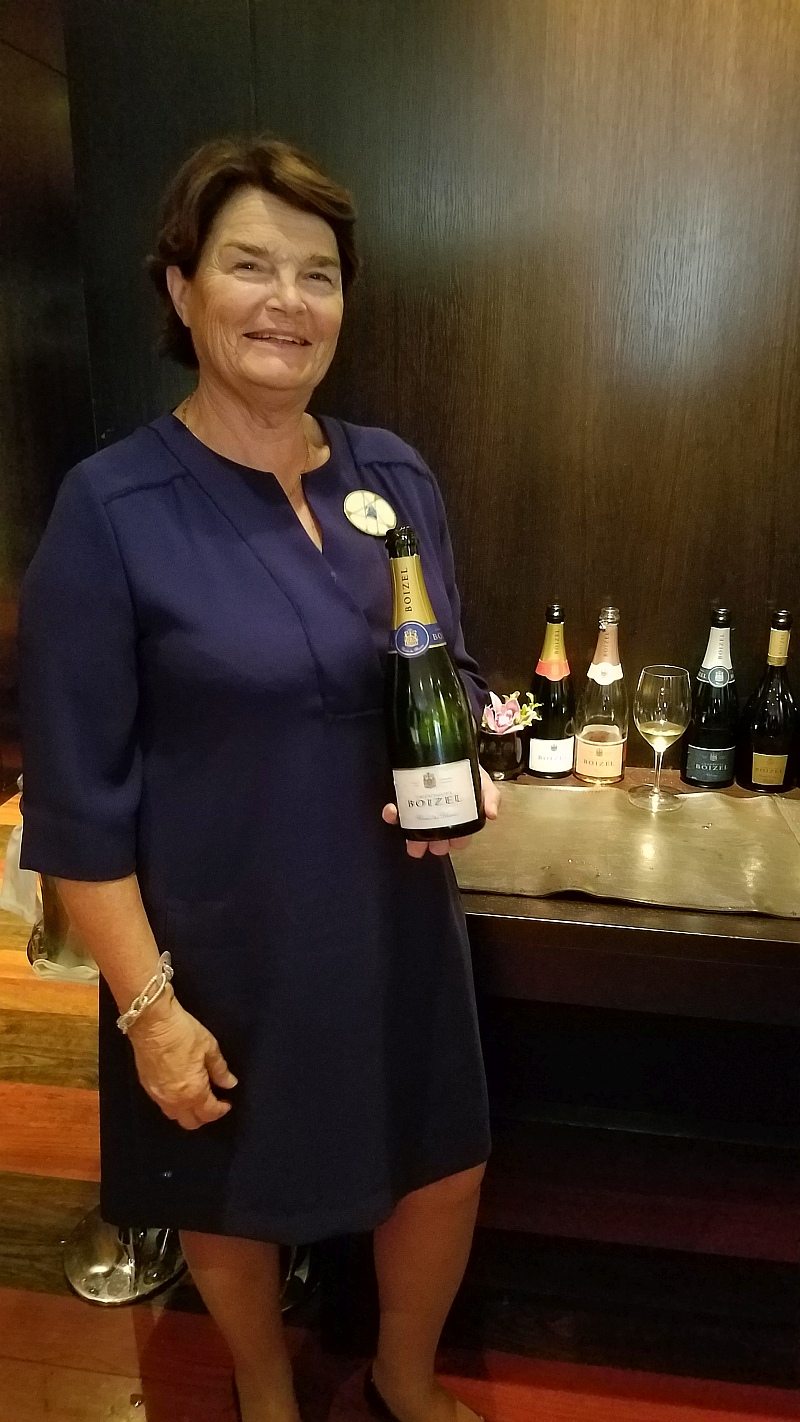 Palm Bay is the national importer for Boizel Champagne.